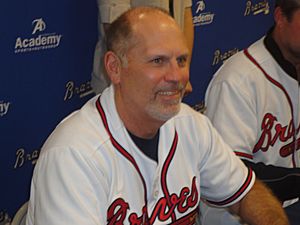 Brian Gerald Snitker (born October 17, 1955) is the manager of the Atlanta Braves. He was hired the Braves during the 2016 season. He never played for any Major League Baseball teams, but he did play minor league baseball in the Braves organization. He later managed several of the Braves' minor league teams and he also served as the third base coach for the Braves from 2007 to 2013.

All content from Kiddle encyclopedia articles (including the article images and facts) can be freely used under Attribution-ShareAlike license, unless stated otherwise. Cite this article:
Brian Snitker Facts for Kids. Kiddle Encyclopedia.