Decatur ( dih-KAY-tər) is the largest city and the county seat of Macon County in the U.S. state of Illinois, with a population of 70,522 as of the 2020 Census. The city was founded in 1829 and is situated along the Sangamon River and Lake Decatur in Central Illinois. Decatur is the seventeenth-most populous city in Illinois.

The city's motto is "Decatur, We Like it Here". The old motto was "The Pride of the Prairie". "The Soybean Capital of the World" is the unofficial, but popular motto.

Decatur was awarded the All-America City Award in 1960.

The city's symbol is the Transfer House, an early-20th-century Victorian structure located originally in the center of town where the city's mass transit lines met. The Transfer House was moved in 1963 to save it from possible destruction as increasing automobile traffic flowed through the highway routed through downtown.

Since 1966, Decatur has been Sister Citied with Tokorozawa, Saitama, Japan. In July 1972, the administrations of 19 independent smaller municipalities were merged to form Decatur's second Sister City, Seevetal, Lower Saxony, Germany. The 19 towns and villages forming Seevetal were Beckedorf, Bullenhausen, Emmelndorf, Fleestedt, Glüsingen, Groß Moor, Helmstorf, Hittfeld, Holtorfsloh, Horst, Hörsten, Klein Moor, Lindhorst, Maschen, Meckelfeld, Metzendorf, Ohlendorf, Over and Ramelsloh. The Decatur Sister Cities Committee annually coordinates both inbound and outbound High School students, who serve as ambassadors between the three cities. Since mid-2012, the City of Decatur and City of Camajuaní in the Province of Villa Clara, Cuba have worked to develop Sister City relations. As of March 2013, both governments have approved the relationship, but no formal agreements have been signed.

Between 1829 and 1836 the county commissioners court had jurisdiction as it was the seat of Macon County,. By 1836 the population reached approximately 300, Richard Oglesby was elected president of the first board of trustees. Other members of the board of trustees included Dr. William Crissey, H.M. Gorin and Andrew Love as clerk,.

In the winter of 1855–56, a special city incorporation charter was obtained. This charter provided an aldermanic form of government and on January 7, 1856 an election was held for mayor, two aldermen for each of the four wards, and city marshal. This aldermanic form of government continued until January 18, 1911 when Decatur changed to city commissioner form of government. The new commissioner system provided a mayor elected at large and four commissioners to serve as administrators of city services: accounts and finance, public health and safety, public property, and streets and public improvements. The mayor also served as Commissioner of Public Affairs,.

The mayor and commissioner system prevailed until a special election on November 25, 1958 in which the present council-manager form of government was adopted. According to the city website, the "City of Decatur operates under the Council-Manager form of government, a system which combines the leadership of a representative, elected council with the professional background of an appointed manager." The mayor and all members of the council are elected at large. Their duties include determining city policy, receiving nominal annual salaries, and as representatives of the city in public ceremonies. The appointed manager handles all city administration and is the council's employee and not an elected official. Since 1959, the following have served as City Managers: John E. Dever, W. Robert Semple, Leslie T. Allen, Jim Bacon, Jim Williams, Steve Garman, John A. Smith (acting), Ryan McCrady, Gregg Zientara (interim), and Timothy Gleason. 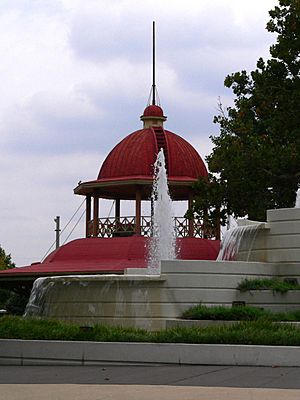 The Decatur Transfer House in the background in downtown's Central Park

As of 17 August  2015 (2015 -08-17)[update], Julie Moore-Wolfe serves as the current mayor of Decatur. Moore-Wolfe was appointed unanimously by the Decatur City Council following the death of Mayor Mike McElroy. She is the first female to be mayor of Decatur. Moore-Wolfe, who had been appointed mayor pro tem in May 2015, became acting mayor after McElroy died on July 17, 2015. McElroy had been mayor from 2009 and had recently been re-elected to a second term as mayor in April 2015. Timothy Gleason has served as city manager of Decatur since March 23, 2015.

During the winter of 1855–56, a special incorporation charter of Decatur as a city was obtained providing for an aldermanic form of government.

The Muni band was organized September 19, 1857 making it one of the oldest nonmilitary bands in continuous service in the United States and Canada. It was originally known as the Decatur Brass Band, Decatur Comet Band and the Decatur Silver Band until 1871 when it was reorganized by Andrew Goodman and became the Goodman Band. In 1942 it was officially designated as the Decatur Municipal Band.

The Decatur Public Library was originally built with a grant from Andrew Carnegie. The original library was built in 1902 and opened to the public in 1903. The building served the community until 1970 when the library moved to North Street at the site of a former Sears, Roebuck & Co. store. In 1999 the library moved to its present location on Franklin Street, which is also an abandoned Sears building. The library is part of the Illinois Heartland Library System. Decatur is one of only a very few communities to have razed an original Carnegie Library. A bank now stands in its place.

Decatur was the original home of the Chicago Bears, from 1919 to 1920. The football team was then known as the Decatur Staleys and played at Staley Field, both named after the local food-products manufacturer.

From 1900 to 1974, Decatur was the home of the Commodores, a minor-league baseball team playing at Fans Field.

The USTA/Ursula Beck Pro Tennis Classic has been held annually since 1999. Male players from over 20 countries compete for $15,000 in prize money as well as ATP world ranking points at the Fairview Park Tennis Complex. The tournament is held for ten consecutive days at Fairview Park concluding on the first weekend in August.

Starting in 2007, Decatur has hosted the Rodney T. Miller Lakeside Triathlon. This sprint-distance triathlon is presently scheduled on the first weekend each July.

Decatur hosts the annual Decatur-Forsyth Classic presented by Tate & Lyle and the Decatur Park District. The tournament is traditionally held in June.

The city is named after War of 1812 naval hero Stephen Decatur.

Decatur has become an affiliate of the U.S. Main Street program, in conjunction with the National Trust for Historic Preservation.

The Potawatomi Trail of Death passed through here in 1833.

Post No. 1 of the Grand Army of the Republic was founded by Civil War veterans in Decatur on April 6, 1866. 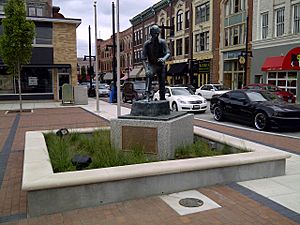 Decatur was the first home in Illinois of Abraham Lincoln, who settled just west of Decatur with his family in 1830. At the age of 21, Lincoln gave his first political speech in Decatur about the importance of Sangamon River navigation that caught the attention of Illinois political leaders. John Hanks, first cousin of Abe Lincoln, lived in Decatur.

On April 18 and 19, 1996, the city was hit by tornadoes. On April 18, an F1 tornado hit the city's southeast side, followed by an F3 tornado the following evening on the northwest side. The two storms totaled approximately $10.5 million in property damage.

On July 19, 1974, a tanker car containing isobutane collided with a boxcar in the Norfolk & Western railroad yard in the East End of Decatur. The resulting explosion killed seven people, injured 349, and caused $18 million in property damage.

In November 1999, Decatur was brought into the national news when Jesse Jackson and the Rainbow/PUSH Coalition protested the expulsion and treatment of several African American students who had been involved in a serious fight at an Eisenhower High School football game.

The Japanese corporation Bridgestone owns Firestone Tire and Rubber Corporation, which operated a large tire factory here. Firestone's Decatur plant was closed in December 2001 in the midst of a tire failure controversy, and all 1,500 employees were laid off. Firestone cited a decline in consumer demand for Firestone tires and the age of the Decatur plant as the reasons for closing that facility.

Caterpillar Inc. has one of its largest manufacturing plants in the U.S. in Decatur. This plant produces Caterpillar's off highway trucks, wheel-tractor scrapers, compactors, large wheel loaders, mining-class motorgraders, and their ultra-class mining trucks (including the Caterpillar 797). Archer Daniels Midland processes corn and soybeans, Mueller produces water distribution products and Tate & Lyle processes corn in Decatur. From 1917 to 1922 Decatur was the location of the Comet Automobile Co., and the Pan-American Motor Corp.

Decatur has been ranked third in the nation as an Emerging Logistics and Distribution Center by Business Facilities: The Location Advisor, and was named a Top 25 Trade City by Global Trade. In 2013 the Economic Development Corporation of Decatur & Macon County established the Midwest Inland Port, a multi-modal transportation hub with market proximity to 95 million customers in a 500-mile radius. The port includes the Archer Daniels Midland intermodal container ramp, the two class I railroads that service the ramp and the city (the Canadian National Railway, and the Norfolk Southern Railway), five major roadways and the Decatur Airport. The Midwest Inland Port also has a foreign trade zone and customs clearing, and the area is both an enterprise zone and tax increment financing district.

In August 2019, Mueller Company announced plans to construct a "state-of-the-art" brass foundry in Decatur on a 30 acre site in the 2700 block of North Jasper Street. The facility is expected to employee 250 personnel.

In November 2020, ADM and InnovaFeed announced plans to construct the world's largest insect protein facility targeted to begin in 2021. The facility will be owned and operated by InnovaFeed and will co-locate with ADM's Decatur corn processing complex. This new project represents innovative, sustainable production to meet growing demand for insect protein in animal feed, a market that has potential to reach 1 million tons in 2027. Construction of the new high-capacity facility is expected to create more than 280 direct and 400 indirect jobs in the Decatur region by the second phase.

According to the EDC of Decatur & Macon County, the top employers in Decatur are as follows:

K–12 public education in the Decatur area is provided by the Decatur Public School District No. 61. High school athletics were in the Big Twelve Conference up to 2013–14. The last two schools in Decatur joined the Central State Eight in the 2014–15 season.

For more than 100 years, Decatur has been a major railroad junction and was once served by seven railroads. After mergers and consolidations, it is now served by two Class I railroads: the Norfolk Southern Railway, and the Canadian National Railway. The city is also served by Decatur Junction Railway, Decatur Central Railroad and Decatur and Eastern Illinois Railroad shortlines.

The Decatur Public Transit System (DPTS) provides fixed-route bus service as well as complementary door-to-door paratransit service for people with disabilities, who are unable to use the bus system, throughout the City of Decatur. Under an agreement with the Village of Forsyth, service is also provided to the Hickory Point Mall area in Forsyth. 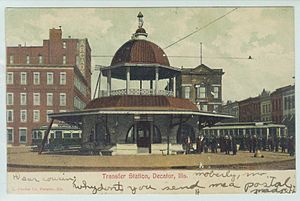 Trolley transfer station in its original location at the intersection of Main and Main streets; from a postcard sent in 1906

All content from Kiddle encyclopedia articles (including the article images and facts) can be freely used under Attribution-ShareAlike license, unless stated otherwise. Cite this article:
Decatur, Illinois Facts for Kids. Kiddle Encyclopedia.