Macon County is a county located in the U.S. state of Illinois. According to the 2010 United States Census, it had a population of 110,768. Its county seat is Decatur.

Macon County was formed on January 19, 1829 out of Shelby County. It was named for Nathaniel Macon, who served as a Colonel in the Revolutionary War. Macon later served as senator from North Carolina until his resignation in 1828. In 1830, future President Abraham Lincoln and his family moved to Macon County. 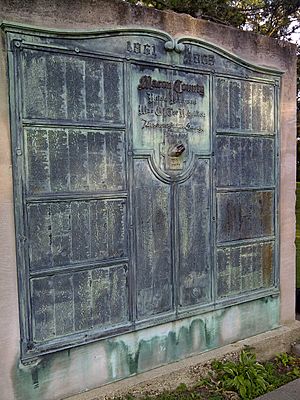 Macon County is primarily flat, as is most of the state and all of the surrounding counties, the result of geological activity during the Pleistocene epoch. During the Illinoian Stage of the Pleistocene, the Laurentide ice sheet covered roughly 85 percent of Illinois, including all of present-day Macon County. The subsequent thaw of the region and retreat of the ice sheet left central Illinois with the characteristic flat topography which it is known for today.

Because of its central location, Macon County is often referred to as "The Heart of Illinois." 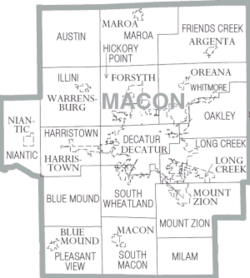 All content from Kiddle encyclopedia articles (including the article images and facts) can be freely used under Attribution-ShareAlike license, unless stated otherwise. Cite this article:
Macon County, Illinois Facts for Kids. Kiddle Encyclopedia.