Moultrie County is a county located in the U.S. state of Illinois. According to the 2010 census, it had a population of 14,846. Its county seat is Sullivan. The name is pronounced as in "mole tree", unlike the pronunciation of its namesake, South Carolinian William Moultrie.

Moultrie County was formed in 1843 out of Shelby and Macon counties. It is named for South Carolina General, and later Governor, William Moultrie. General Moultrie defended Sullivan's Island, South Carolina from British attack in 1776. The site was later renamed Fort Moultrie. Nearby Jasper County was named for Sgt. William Jasper, another hero of the defense of Sullivan's Island.

The official flag of the county is the Moultrie Flag, which was flown over the new fortress on Sullivan's Island, when Moultrie defended it, and was designed by Moultrie, himself. It went on to become iconic of liberty in the South. 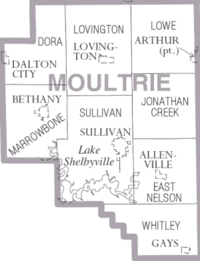 All content from Kiddle encyclopedia articles (including the article images and facts) can be freely used under Attribution-ShareAlike license, unless stated otherwise. Cite this article:
Moultrie County, Illinois Facts for Kids. Kiddle Encyclopedia.