Sullivan is a city in Moultrie County, Illinois, United States. The population was 4,326 at the 2000 census, and 4,396 in 2009. It is the county seat of Moultrie County. Sullivan is named after Sullivan's Island, South Carolina, where Fort Moultrie is located.

There were 1,820 households out of which 28.3% had children under the age of 18 living with them, 51.8% were married couples living together, 10.4% had a female householder with no husband present, and 34.7% were non-families. 31.0% of all households were made up of individuals and 16.5% had someone living alone who was 65 years of age or older. The average household size was 2.28 and the average family size was 2.84.

History and points of interest 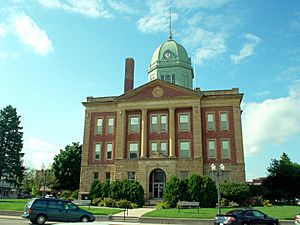 The Moultrie County Courthouse in Sullivan

Sullivan was founded in 1845. Two years after Sullivan was founded, the first official courthouse of the county was built. It was a simple two-story brick building with a hipped roof. Abraham Lincoln passed through this first court house many times as he practiced law in the Moultrie County circuit court.

When Lincoln was campaigning for senate against Stephen Douglas, he gave a speech in Freeland's Grove (now Wyman Park) and there is a monument to his speech today.

The Little Theatre on the Square

A current water safety report<http://www.sullivanil.us/Files/Water_2012_CCR.PDF> provides information about the safety of municipal water.

The Ward Museum at Mason Point, a nursing home just east of Sullivan, displays a collection of items collected from around the world by the Ward family, including one of the largest collections of seashells in the nation. The Ward's collection went on display in 1948, and the collection has remained intact since then. It was featured on an episode of the TV show "Illinois Adventure." The museum was established by Abraham Lincoln "Link" Ward, a farmer, livestock dealer, and auctioneer, and his wife, Cora Anne (Hinterly) Ward. In addiitoin to seashells, the museum contains over 1,000 pieces of antique glassware, including 400 antique goblets. Frontier life items include wooden wheel clocks, circa 1830, copper-toed shoes, spinning wheels, and broad axes. The museum was established in 1948; Cora Ward died in 1967, and the executor of her estate burned the catalog compilation, so the origin of the over 5,000 items donated by the couple, who travelled widely, is unknown.

The City of Sullivan has three TIFs (Tax Increment Financing Districts)." TIF funds are reserved for areas that are "blighted" or in danger of becoming blighted. In 2010, the City of Sullivan issued $8.3 million in bonds by pledging previously unencumbered real estate increment generated annually by the City's three TIF districts. Recipients of TIF funds in 2013 were reported in the City of Sullivan's Resolution 13-E, which is available online. An auditor from West & Company, L.L.C. stated before the Sullivan City Council on January 28, 2013 that revenue that the City of Sullivan receives from the State of Illinois that is designated as TIF sales tax will be used to pay off these (Build America) bonds. The audit evaluated the City of Sullivan's current financial condition as "stable to sound," meaning that it is able to meet its obligations on a daily basis, but that it does not have much room for error in financial decisions. An auditor addressing the Sullivan City Council on January 7, 2014, noted that the City received its final quarterly TIF District 1 Sales Tax Payment from the State of Illinois, in June 2013; this means that the $400,000 to $500,000 in TIF funds that the Sullivan was receiving annually for TIF Funds will no longer be available for TIF projects, and now must go directly into the city's general fund.

Vice President Richard Nixon held a campaign rally during his unsuccessful 1960 Presidential bid. He discarded a half-eaten buffalo burger that was the product of the slaughter of buffalo owned by the City of Sullivan and housed at their street maintenance facility. The discarded burger was retrieved by Sullivan resident Steve Jenne, who preserved it. Jenne exhibited the burger on "The Tonight Show Starring Johnny Carson" in 1988 and was a guest on the Game Show Network's "I've Got A Secret" in 2006.

All content from Kiddle encyclopedia articles (including the article images and facts) can be freely used under Attribution-ShareAlike license, unless stated otherwise. Cite this article:
Sullivan, Illinois Facts for Kids. Kiddle Encyclopedia.