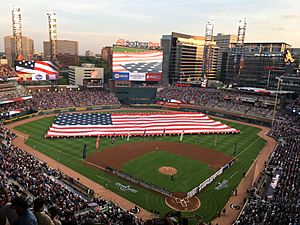 Truist Park, originally known as SunTrust Park, is a baseball stadium in a section of Cobb County, Georgia that has an Atlanta mailing address. It is the home of the Atlanta Braves of Major League Baseball (MLB).

During the stadium's planning process, it was named SunTrust Park when the Braves reached a naming agreement with the Atlanta-based SunTrust banking company. In February 2019, SunTrust merged with another banking company, BB&T, and the new company renamed itself Truist. However, the ballpark kept the SunTrust name through the 2019 season. The new name of Truist Park became official on January 14, 2020.

All content from Kiddle encyclopedia articles (including the article images and facts) can be freely used under Attribution-ShareAlike license, unless stated otherwise. Cite this article:
Truist Park Facts for Kids. Kiddle Encyclopedia.