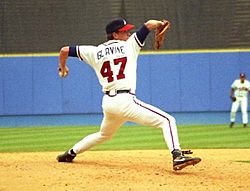 Glavine pitching for the Braves in 1993

Tom Glavine (born March 25, 1966) is a former baseball player who played pitcher. He won more than 300 games in his career and has won the second-most games in National League history (behind his former teammate Greg Maddux). He won one World Series with the Atlanta Braves in 1995, and was the World Series Most Valuable Player (MVP). Most of his career was with the Braves (from 1987 to 2002 and in 2008), but he also played with the New York Mets from 2003 to 2007.

All content from Kiddle encyclopedia articles (including the article images and facts) can be freely used under Attribution-ShareAlike license, unless stated otherwise. Cite this article:
Tom Glavine Facts for Kids. Kiddle Encyclopedia.