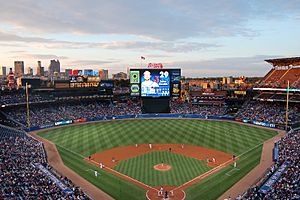 Turner Field is a baseball ballpark in Atlanta, Georgia, home to the Atlanta Braves. The park first opened in 1996 to host the Summer Olympics in Atlanta, when it was known as Centennial Olympic Stadium. After the Olympics, the park was changed to allow baseball to be played, and opened for the 1997 braves season., The stadium replaces Atlanta-Fulton County Stadium, which was built in 1966.

On November 11, 2013, it was announced that the Braves would leave Turner Field for a new stadium in Cobb County. The lease which allowed the Braves to play in Turner Field was set to end in 2016, and the team stated that many fans had problems getting to the stadium on game days. At the new stadium's groundbreaking on September 16, 2014, that venue's name was revealed as SunTrust Park.

All content from Kiddle encyclopedia articles (including the article images and facts) can be freely used under Attribution-ShareAlike license, unless stated otherwise. Cite this article:
Turner Field Facts for Kids. Kiddle Encyclopedia.