Barnsley Resort is situated on the grounds of a historic former manor house near Adairsville, Georgia, United States. Originally known as Woodlands (later known as Barnsley Gardens), the estate was established by Godfrey Barnsley, originally of Liverpool, England. He built the Italianate manor in the late 1840s. 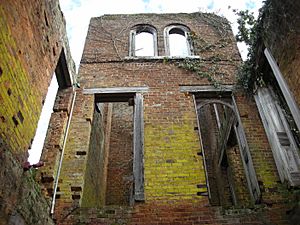 Close-up of the ruins

Origin: Barnsley acquired the land from the state of Georgia after acquiring it from the Cherokee nation. The land was then divided into 160 acre plots. Barnsley then amassed the large acreage by obtaining these homestead plots. The original manor at Barnsley Resort was built for Godfrey's wife Julia. Before it was completed, Julia fell ill and died, and Barnsley suspended its construction. Later, he said he felt her presence at the site telling him to finish the house for him and his children. The mansion was built in the style of an Italian villa by the flamboyant architect Andrew Jackson Downing. During the American Civil War, the mansion had been the site of a battle, and much of the house and Barnsley's possessions were ransacked by the Union Army. Barnsley lost his fortune during the Civil War and later moved to New Orleans before he died in 1873.

Barnsley's descendants continued to live at Woodlands until the roof of the main house was blown off by a tornado in 1906. Barnsley's granddaughter, Miss Addie, and her family who were living there at the time, moved into the kitchen wing and the main house was never restored, and eventually fell to ruins. In 1988 Prince Hubertus Fugger purchased the estate and began a major project to stabilize the ruins and rescue and restore the gardens. The original boxwood hedges planted in the early 1840s still survived and had grown up into a thicket of small trees and vines. These were carefully cut back over a number of years to reveal the interweaving paths and flower beds of the original parterre garden. This is now one of the few surviving antebellum gardens of the southern United States.

All content from Kiddle encyclopedia articles (including the article images and facts) can be freely used under Attribution-ShareAlike license, unless stated otherwise. Cite this article:
Barnsley Gardens Facts for Kids. Kiddle Encyclopedia.