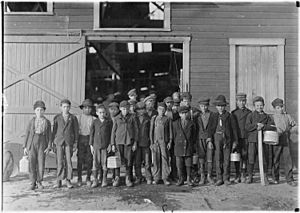 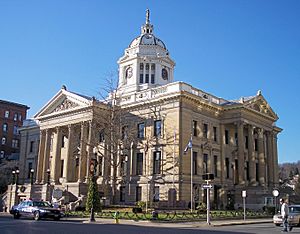 Fairmont is a city in Marion County, West Virginia, United States. The population was 18,704 at the 2010 census. It is the county seat of Marion County.

Prior to the founding of Fairmont, the land that would become Marion County was part of Monongalia and Harrison County. Oral history indicates that in 1808, Boaz Fleming made his annual trek to Clarksburg to pay his brother's Harrison County taxes. While in Clarksburg, Fleming attended a social gathering that included his cousin, Dolly Madison, wife of President James Madison. Fleming complained to Mrs. Madison about having to travel over a hundred miles each year from his home to pay his Monongalia County taxes and his brother's Harrison County taxes. Mrs. Madison supposedly suggested that he create his own county to save him all that travel. In 1814, Fleming circulated a petition to do precisely that, naming the proposed county Madison County, in honor of Dolly and James Madison.

Milford (also known as Pleasantville) was the only town within the borders of Fleming's proposed county, so Fleming decided to make this town the seat of Madison County. However, Milford's citizens preferred to remain part of Monongalia County. As a result, Fleming's petition failed to gain sufficient support to be presented to the Virginia General Assembly. Fleming then focused on creating a town near his farm, which was located on the west side of the Monongahela River. In 1817, Fleming's sons—William and David—began to clear land on part of their father's farm to make way for the new town; this part of the farm would later become downtown Fairmont. In 1819, a road was built from Clarksburg to Morgantown. Fleming's new town was about halfway between the two cities, making it a good resting point. The town was incorporated as Middletown on January 19, 1820. It is unknown if the town was called Middletown because of its location midway between Clarksburg and Morgantown or because Fleming's first wife, Elizabeth Hutchinson, was originally from Middletown, Delaware.

The current borders of Marion County were established in 1842, and Middletown was named the county's seat. At that time, William Haymond, Jr. suggested that the town's name be changed to Fairmont because the town had a beautiful overlook of the Monongahela River, giving it a "fair mount." The Borough of Fairmont was incorporated in 1843 by the Virginia General Assembly.

Many of the first buildings in Fairmont were poorly constructed. By 1852—little more than 30 years after the city's founding—a large portion of Fairmont was reported to be run-down and dilapidated. Reports from 1873 indicate that these buildings had continued to fall into disrepair. On April 2, 1876, a fire destroyed a large portion of the city's business district, as well as many houses in the area. The continuing dilapidation of the city's buildings may have contributed to the fire; the large number of coal mines under Fairmont may have also played a role.

Between 1891 and 1901—in a span of only 10 years—Fairmont's population had increased from 1,000 to 7,000. The City of Fairmont was chartered in 1899; as a result of the charter, the city absorbed the surrounding towns of Palastine (also known as East Side) and West Fairmont. By 1901, Fairmont was an important commercial center. Many railroads—including the Baltimore and Ohio Railroad on its way from Cumberland, MD to Wheeling, WV—traveled through the city. By this time, Fairmont was also the leading center of the coal trade industry in northern West Virginia, employing some 10,000 workers in the coal mines around Fairmont. The city also gained many improvements, including telephone, water, and electric service.

According to the US Army Corp of engineers, Fairmont, West Virginia, is the port city farthest from the ocean (2,085 miles) via an inland waterway.

Fairmont is located in the North-Central region of the state, along West Virginia's I-79 High Tech Corridor. Major highways include:

Fairmont Municipal Airport (Frankman Field) is a public use airport located two nautical miles (4 km) southwest of the central business district of Fairmont. It is owned by the Fairmont-Marion County Regional Airport Authority.

There were 8,133 households of which 24.1% had children under the age of 18 living with them, 37.7% were married couples living together, 12.5% had a female householder with no husband present, 4.2% had a male householder with no wife present, and 45.6% were non-families. 36.0% of all households were made up of individuals and 14.1% had someone living alone who was 65 years of age or older. The average household size was 2.16 and the average family size was 2.83.

There were 8,447 households of which 21.4% had children under the age of 18 living with them, 40.2% were married couples living together, 11.7% had a female householder with no husband present, and 44.7% were non-families. 36.4% of all households were made up of individuals and 16.8% had someone living alone who was 65 years of age or older. The average household size was 2.16 and the average family size was 2.83.

Fairmont Senior High School (FSHS) is an historic secondary school, listed on the National Register of Historic Places on March 22, 2002. Architect William B. Ittner, who is responsible for over three dozen entries in the National Register, designed the school in the late 1920s. The school's architectural classification is Colonial Revival, with a stone foundation, brick walls, and asphalt shingle roofing.

Fairmont State University is a public university with an approximate enrollment of 7,700 students. The institution offers master's degrees in business, education, teaching, criminal justice, and nursing, in addition to 90 baccalaureate and 50 associate degrees. Originally named Fairmont Normal School, the college was located on the corner of Fairmont Avenue and Second Street and moved to its present location in 1917.

Pricketts Fort is a 22-acre (8.9 ha) West Virginia state park and site of an historic fort built to defend early European settlers from raids by hostile Native Americans. The feuds were generally over territory the settlers appropriated following the Treaty of Fort Stanwix (1768).

All content from Kiddle encyclopedia articles (including the article images and facts) can be freely used under Attribution-ShareAlike license, unless stated otherwise. Cite this article:
Fairmont, West Virginia Facts for Kids. Kiddle Encyclopedia.