Mary Lou Retton Kelley (born January 24, 1968) is a retired American gymnast. At the 1984 Summer Olympics in Los Angeles, she won a gold medal in the individual all-around competition, as well as two silver medals and two bronze medals. Her performance made her one of the most popular athletes in the United States.

Retton was the first ever American woman to win the all-around gold medal at the Olympics and was the only one to do so for twenty years. She is credited with being a pioneering figure in American women's gymnastics, including by the four American women who have since equaled her feat consecutively: Carly Patterson (Athens in 2004), Nastia Liukin (2008 in Beijing), Gabby Douglas (2012 in London), and Simone Biles (2016 in Rio de Janeiro). Twice during that span, Americans also took silver as part of a one-two finish: Shawn Johnson in 2008 and Aly Raisman in 2016. Furthermore, prior to Retton's Olympic triumph, no American woman had won all-around gold at the World Championships; since then, eight Americans have done so a combined eleven times - in chronological order, Kim Zmeskal, Shannon Miller (twice), Chellsie Memmel, Shawn Johnson, Bridget Sloan, Jordyn Wieber, Simone Biles (three times), and Morgan Hurd.

Mary Lou Retton was born in 1968 in Fairmont, West Virginia, of Italian heritage (her family's original surname was "Rotunda"). Her father, Ronnie, operated a coal-industry transportation equipment business. She attended Fairmont Senior High School, but did not graduate. She competed in the 1984 Olympic games in Los Angeles, California, during her sophomore year of high school. She grew up in a Christian home. She and her family attend Second Baptist Church Houston.

Retton lived in Houston, Texas, until 2009, when her family returned to West Virginia and again moved back to Houston in 2012. She is married to former University of Texas quarterback and Houston real estate developer Shannon Kelley, who now works for the Houston Baptist University athletic department. Together they have four daughters: Shayla (b. 1995), McKenna (b. 1997), Skyla (b. 2000), and Emma (b. 2002).

Retton was inspired by watching Nadia Comăneci outshine defending Olympic two-event winner Olga Korbut on television at the 1976 Summer Olympics in Montreal, and she took up gymnastics in her hometown of Fairmont. She was coached by Gary Rafaloski. She then decided to move to Houston, Texas, to train under Romanians Béla and Márta Károlyi, who had coached Nadia Comăneci before their defection to the United States. Under the Károlyis, Retton soon began to make a name for herself in the U.S., winning the American Cup in 1983 and placing second to Dianne Durham (another Károlyi student) at the US Nationals that same year. Retton missed the World Championships in 1983 due to a wrist injury. Nevertheless, Retton won the American Classic in 1983 and 1984, as well as Japan's Chunichi Cup in 1983.

After winning her second American Cup, the U.S. Nationals, and the U.S. Olympic Trials in 1984, Retton suffered a knee injury when she was performing a floor routine at a local gymnastics center. She had sat down to sign autographs when she felt her knee lock, forcing her to undergo an operation five weeks prior to the 1984 Summer Olympics, which were going to be held in Los Angeles- the first time the Summer Olympics had been in the United States in 52 years. She recovered just in time for this most prestigious of tournaments, and in the competition, which was boycotted by the Soviet bloc nations except for Romania, Retton was engaged in a close battle with Ecaterina Szabo of Romania for the all-around gold medal. Trailing Szabo (after uneven bars and balance beam) by 0.15 with two events to go, Retton scored perfect 10s on floor exercise and vault — the last event in an especially dramatic fashion, as there had been fears that her knee injury and the subsequent surgery might impair her performance. Retton won the all-around gold medal by 0.05 points, beating Szabo and becoming the first American to receive the all-around gold medal. She also became the first female gymnast from outside Eastern Europe to win the individual all-around gold.

At the same Olympics, Retton won four additional medals: silver in the team competition and the horse vault, and bronze in the floor exercise and uneven bars. For her performance, she was named Sports Illustrated magazine's "Sportswoman of the Year". She appeared on a Wheaties box, and became the cereal's first official spokeswoman.

In 1985 Retton won the American Cup all around competition for the third and final time. She retired in 1986. 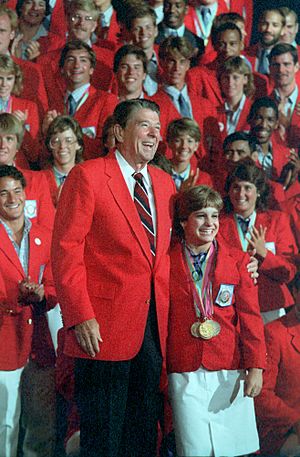 President Ronald Reagan and Retton with the U.S. Olympic Team in Los Angeles, 1984

An ardent Christian conservative, she was an outspoken supporter of the Reagan Administration in the United States. She appeared in a variety of televised ads supporting Ronald Reagan as well as appearing at a rally for Reagan's reelection campaign just a month after the Olympics in her home state of West Virginia. Retton delivered the Pledge of Allegiance with fellow former gymnast and 1996 Olympic gold medalist Kerri Strug on the second night of the 2004 Republican National Convention.

Retton's hometown Fairmont, West Virginia, named a road and a park in the town after her. She retired from gymnastics after winning an unprecedented third American Cup title in 1985. She later had cameo appearances as herself in Scrooged and Naked Gun 33⅓: The Final Insult.

During the 1990s, Retton worked as a spokeswoman for the US drugstore chain Revco, appearing in advertisements for it. Retton was elected to the National Italian American Sports Hall of Fame in 1992.

In 1993, the Associated Press released results of a sports study in which Retton was statistically tied for first place with fellow Olympian Dorothy Hamill as the most popular athlete in America.

In 1997, Retton was inducted into the International Gymnastics Hall of Fame.

Retton has many commercial endorsements, including bowling and shampoo. She was the first female athlete to be pictured on the front of a Wheaties box, and General Mills stated that Wheaties sales improved after her appearance. She is a frequent analyst for televised gymnastics and attended The University of Texas at Austin after the Olympics.

She was born with hip dysplasia, a condition aggravated by her years as a competitive gymnast. After experiencing increased pain she had hip replacement surgery on her left hip in her mid-30s. In October 2008, she visited the Biomet facility in Warsaw, Indiana, and met the machinists who produced her hip implant.

Retton has an uneven bars move called the "Retton flip", a transition (front flip) from low- to high-bar, resulting in the gymnast perched or "sitting" on top of the high bar. This move and many others like it are no longer in the Code of Points due to old-style "belly beat" moves no longer being used in bars competition.

All content from Kiddle encyclopedia articles (including the article images and facts) can be freely used under Attribution-ShareAlike license, unless stated otherwise. Cite this article:
Mary Lou Retton Facts for Kids. Kiddle Encyclopedia.