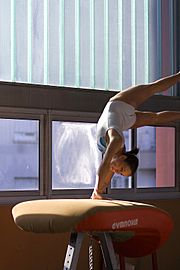 A vault is an apparatus that male and female gymnasts perform on. A vault is included in gymnastics competitions such as the olympics. The gymnasts first run before they flip on the vault. Either the male or female gymnast perform a flip in the air and land on the floor. When the gymnast lands on the floor, he or she has to be in balance.

Early forms of the vault were invented by German Friedrich Ludwig Jahn. The apparatus itself originated as a "horse", much like the pommel horse but without the handles. It was sometimes called a "vaulting horse". The horse was set up with its long side perpendicular to the run for women, and parallel for men. The vaulting horse was the apparatus used in the Olympics for over a century It began with the 1896 Summer Olympics and ending with the Gymnastics at the 2000 Summer Olympics.

Following a number of problems, International Gymnastics Federation (FIG) changed the apparatus. They did it for both safety reasons and for better acrobatics. The 2001 World Artistic Gymnastics Championships were the first international competition to make use of the "vaulting table". This was an apparatus made by Dutch gymnastics equipment company Janssen-Fritsen since the mid-1990s. It features a flat, larger, and more cushioned surface almost parallel to the floor. It slopes downward at the end closest to the springboard. Gymnasts nicknamed it the "tongue".

All content from Kiddle encyclopedia articles (including the article images and facts) can be freely used under Attribution-ShareAlike license, unless stated otherwise. Cite this article:
Vault (gymnastics) Facts for Kids. Kiddle Encyclopedia.