Clarksburg is a city in and the county seat of Harrison County, West Virginia, United States, in the north-central region of the state. The population of the city was 16,578 at the 2010 census. It is the principal city of the Clarksburg, WV Micropolitan Statistical Area, which had a population of 94,221 in 2014. Clarksburg was named National Small City of the Year in 2011 by the National League of Cities. 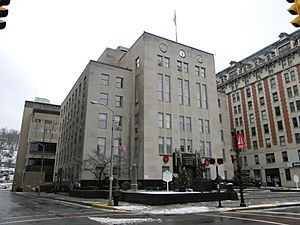 As early as 1772, settlers began locating their lands near where Clarksburg now stands. In 1773, Major Daniel Davisson (1748-1819) took up 400 acres (1.6 km2), upon which the principal part of the town is now located. By 1774, the following persons had settled in the neighborhood of present Clarksburg: Daniel Davisson, Obadiah Davisson (Daniel's father), Amaziah Davisson (Daniel's uncle), Thomas, John, and Matthew Nutter, Samuel and Andrew Cottrill (brothers), Sotha Hickman, and Samuel Beard. Undoubtedly, there were others also located on these public lands of which no official records were made.

Clarksburg was formed in 1785 in Virginia. The city is named for General George Rogers Clark, who gained fame on the frontier by his many expeditions against the British and Indians in the Indian Wars and the war of the American Revolution, particularly by his capture of Fort of Vincennes, now in the State of Indiana, in 1778.

In 1787, the Virginia General Assembly established the Randolph Academy at Clarksburg, the first such educational institution west of the Alleghenies.

Construction of the first courthouse began in 1787. That building was followed by four increasingly larger courthouses, the most recent one completed in 1932. The first Court House, stood on what is now the North East Corner of Second and Main Streets and the jail stood on the opposite side of Main Street near where the Presbyterian church now stands.

Poor transportation slowed development until the 1830s, when the Northwestern Turnpike was built from Winchester to Parkersburg via Romney and Clarksburg. The arrival of the B&O Railroad in the mid-1850s opened the county to development. During the Civil War, the B&O line made Clarksburg an important Union supply base.

In 1840 a daily line of stages and a regular mail service was established that connected with the Ohio River steamers at Parkersburg.

Telephone service, the first in the state, began in Clarksburg in the mid-1880s. In 1887, the city laid its first six miles of water lines; downtown streets were lit by electricity in 1889. In 1900, the first sewer lines were installed, Main and Pike streets were paved with brick, and the city’s first trolley tracks were laid.

On October 11, 1996, seven men having connections with the Mountaineer Militia, a local anti-government paramilitary group, were arrested on charges of plotting to blow up the Federal Bureau of Investigation's Criminal Justice Information Services Division complex in Clarksburg. While members of the group had been assembling large quantities of explosives and blasting caps, militia leader Floyd Raymond Looker obtained blueprints of the FBI facility from a Clarksburg firefighter. Plastic explosives were confiscated by law enforcement officials at five locations in West Virginia, Pennsylvania, and Ohio. Looker was taken into custody after arranging to sell the blueprints for $50,000 to an undercover FBI agent, whom he believed to be a representative of an international terrorist group. In 1998 Looker was sentenced to 18 years in prison. Two other defendants were sentenced on explosives charges, and the firefighter drew a year in prison for providing blueprints.

On June 29, 2012, a violent storm, called a derecho, raced across West Virginia, leaving downed trees and damaged homes in its wake. A derecho (pronounced "deh-REY-cho") is a widespread wind storm that is associated with a band of rapidly moving storms. An American scientist first used the Spanish term in 1888 to describe this kind of weather event, but most West Virginians were unfamiliar with it until the 2012 derecho came and went.

The storm did widespread damage in the state. The strong winds blew down trees, which took power lines with them. About 688,000 homes and businesses lost electricity in the derecho, and a series of storms in the following week knocked out power to additional residents. It took more than a week to restore power to many residents. Some residents lost water, cable, and Internet service, as well. The storm came at a time when the state was experiencing a heat wave, with temperatures over 100 degrees on some days. Health officials in West Virginia attributed the deaths of three people to the storm.

The last time a derecho had been recorded in West Virginia was 1991.

Clarksburg is located in West Virginia's North-Central region. It lies within the ecoregion of the Western Allegheny Plateau.

The Northwestern Turnpike, now known as U.S. Route 50, chartered in 1827, and began in 1831, reached Clarksburg in 1836 and was macadamized from the Tygarts Valley River to Parkersburg in 1848.

The Baltimore and Ohio Railroad reached Clarksburg from Grafton in 1856.

Clarksburg is served by the North Central West Virginia Airport, approximately 7 miles east of the city. 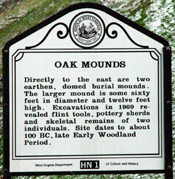 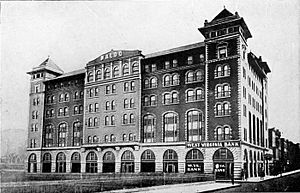 Relation of Clarksburg to nearby places, not necessarily contiguous

There were 7,213 households of which 28.5% had children under the age of 18 living with them, 38.0% were married couples living together, 14.7% had a female householder with no husband present, 5.2% had a male householder with no wife present, and 42.1% were non-families. 35.3% of all households were made up of individuals and 14.6% had someone living alone who was 65 years of age or older. The average household size was 2.25 and the average family size was 2.91.

There were 7,447 households out of which 25.0% had children under the age of 18 living with them, 41.6% were married couples living together, 13.4% had a female householder with no husband present, and 41.2% were non-families. 36.7% of all households were made up of individuals and 17.3% had someone living alone who was 65 years of age or older. The average household size was 2.20 and the average family size was 2.87.

During the first decade of the 20th century, French was frequently spoken on the West Virginia streets of such communities as South Charleston, the North View section of Clarksburg, and the small town of Salem. These neighborhoods shared a connection to the window-glass industry, and the people speaking French often were Walloons, or French-speaking Belgians. About 1900, changes in window-glass manufacture brought thousands of immigrants from the Charleroi area of Belgium just when the industry was expanding into West Virginia to take advantage of cheap natural gas and large deposits of silica sand. For a generation, window-glass factories, many of which were worker-owned cooperatives, relied heavily on these Belgian immigrants to provide the skills necessary to make West Virginia a national center of production.

West Virginia’s Belgians came from an area economically similar to West Virginia. The Charleroi basin of the Hainaut province in Belgium was dependent upon coal mining, steel production, and window-glass manufacturing. The Belgians’ new homes in north-central West Virginia and the Kanawha Valley must have felt familiar.

They left Europe because the Belgian glass factories were struggling in the 1880s and 1890s. Equally important, workers had limited opportunities to voice their concerns either politically or economically. Belgian glassworkers found in the United States an effective trade union to represent their workplace concerns and the means to build a vibrant political movement advocating democratic socialism. In fact, some of these Belgian enclaves, including Star City near Morgantown and Adamston (now part of Clarksburg), elected Socialist mayors in the years before World War I. Aside from politics, Belgian ethnic communities also became famous for the cuisine, musical groups, social clubs, and celebrations composing the unique Belgian cultural heritage.

The technological changes that had made skilled Belgian workers so valuable, however, soon gave way to newer technologies that turned window-glass manufacture from a skilled craft to a mass-production industry. By the end of the 1920s, a few large corporations dominated the industry and machines replaced most of the skilled craftsmen. One exception, window-glass cutters, continued to provide opportunities to a new generation of Belgian-Americans. More than 70 years later, the Belgian-American Heritage Society keeps alive the history and culture of this fascinating ethnic group.

The climate in this area is characterized by relatively high temperatures and evenly distributed precipitation throughout the year. According to the Köppen Climate Classification system, Clarksburg has a Humid subtropical climate, abbreviated "Cfa" on climate maps.

All content from Kiddle encyclopedia articles (including the article images and facts) can be freely used under Attribution-ShareAlike license, unless stated otherwise. Cite this article:
Clarksburg, West Virginia Facts for Kids. Kiddle Encyclopedia.