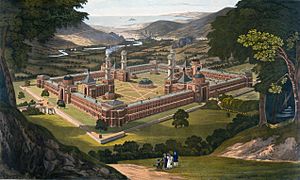 Socialism is an economic and political system. It is an economic theory of social organization. It believes that the means of making, moving, and trading wealth should be owned or controlled by the workers. This means the money made belongs to the people who make the things, instead of a group of private owners. People who agree with this type of system are called socialists.

How can a society own the means of making wealth? There are two main ways socialists answer this question: by the state on behalf of the workers, or by worker-owned cooperatives. Socialists believe that everything in society is made by the cooperative efforts of the people and citizens.

Another kind of socialism is "collectivization." In this system, money and goods are shared more equally among the people, with the government in control. In theory, this system results in the gap between classes getting smaller, with the state helping the nation's poorest people, while the richest agree to higher taxes and economic restrictions.

Communism as a goal

Some socialists believe that socialism will evolve into what they see as a more advanced system: communism, with no state, money, or social classes. In Marxist theory, socialism is a temporary social state between capitalism and communism, although some socialists have no intention of transitioning to communism.

Most non-communist people say "communism" when they mean the Marxist and Leninist ideas of Russia's Bolshevik party. Marx believed that capitalism followed the economic and political system of feudalism. He also believed that capitalism would treat unfairly many people and that those people would eventually revolt and change to socialism. Then he thought that socialism can be another bridge, but to communism. However, many people incorrectly use the term "Communist" to refer to a socialist state. Others call this 'State Socialism,' to distinguish it from the communist goal that does not need a state or any form of government. To non-communists, the word 'socialism' is now used mostly for attempts to come close to this goal in a democratic state.

Many countries see socialism differently. Socialist International is an organization dedicated to the cause of promoting socialist ideals, and has ties with many socialist parties, especially Social Democratic parties.

A Welshman, Robert Owen, was the first socialist. His followers began calling themselves socialists in 1841. He is still regarded as a pioneer of the Co-operative Movement in Britain. He said that workers should own the companies they worked for. The workers would then share the profits among themselves. He set up a new model factory in New Lanark, Scotland.

Karl Marx is the most well-known creator of the theory of socialism, and of communism. He wrote a book about capitalism, socialism, and communism, called "The Communist Manifesto". Friedrich Engels co-wrote the book, and paid for much of Marx's work and research.

Socialism with Chinese characteristics applies socialism and Marxism to the actual conditions of China. One example is Deng Xiaoping's Chinese economic reform. The ideology consists of:

All content from Kiddle encyclopedia articles (including the article images and facts) can be freely used under Attribution-ShareAlike license, unless stated otherwise. Cite this article:
Socialism Facts for Kids. Kiddle Encyclopedia.