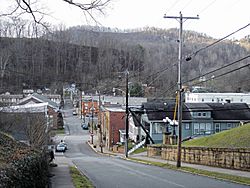 Glenville as viewed from Court Street in 2006 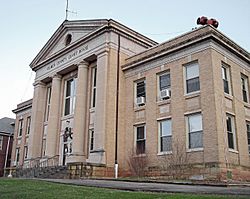 The Gilmer County Courthouse in Glenville

Glenville is a town in and the county seat of Gilmer County, West Virginia, United States, along the Little Kanawha River. The population was 1,537 at the 2010 census. It is the home of Glenville State College.

In the late 1700s and early 1800s, pioneers began settling in the area they called ‘‘the Ford’’ because it was a place where travelers could cross the river. Later, the community was named Glenville because of its location in a glen. The first grist mill in Gilmer County was constructed there in 1812. The first courthouse was completed in 1850, the second in 1872, and the current courthouse in 1923. Glenville was incorporated in 1856.

Before the 1930s, the Little Kanawha River’s commercial traffic dominated the town’s economy. Road construction contributed to the demise of riverboating by the late 1930s. The natural gas and oil industry rose to prominence after oil was struck in 1875 at nearby Letter Gap. Glenville is now the headquarters of several oil and gas firms. The 1985 flood devastated the downtown, leading many businesses to move to the higher Hays City neighborhood at the main highway intersection.

The Little Kanawha Valley Bank was incorporated in 1901. Its small frame building, covered in pressed metal, is now on the National Register of Historic Places. By 1906, the First National Bank of Glenville and the Glenville Banking and Trust Company had also been created. Glenville is now served by United Bank and a branch of Calhoun Banks of Grantsville.

Early Methodist circuit riders and Baptist missionaries brought religion to Glenville early in the 19th century. The Presbyterian Church was organized in 1847; the First Baptist Church, 1850; and Trinity United Methodist Church, 1896. Several other churches also serve the area today. Glenville has a golf club and recreation center, among several other facilities built at the old county poor farm.

In 1885, the Glenville Crescent first published Ellen King’s poem, ‘‘The West Virginia Hills,’’ which later became the official state song. While this newspaper didn’t survive, the Glenville Pathfinder (1892) and the Glenville Democrat (1904) have.

The flood of 1985 devastated all of Glenville. A late season tropical storm named Juan moved North leaving abundant moisture over the Southeast. On Sunday, November 3, another storm formed in Southeastern Georgia. This new storm tapped into the moisture left by Juan. By November 4, a large area of rain began to form from the Western North Carolina to Southern West Virginia. The storm's center slowly moved North, and soon, engulfed all of Glenville. Rainfall rates of 3 to 6 inches in 12 hours were observed over the headwaters of the Potomac, Greenbrier, and Little Kanawha rivers.

On Monday night, November 5, severe flooding took place and by midnight the rain became lighter, but it was too late, fatal flooding had begun. All of Down-Town Glenville was rocked. Stores were closed, and shops were flooded. Shopkeepers attempted to save their stock by piling sandbags up to stop the water, but their futile attempts to save their stores were mocked by the savagery of this new storm. In the end, 47 lives were lost to this horrible natural disaster. Most of the deaths were in rural Pendleton County and Grant County, according to the National Weather Service.

There were 540 households of which 22.2% had children under the age of 18 living with them, 29.4% were married couples living together, 12.0% had a female householder with no husband present, 4.8% had a male householder with no wife present, and 53.7% were non-families. 36.5% of all households were made up of individuals and 8.3% had someone living alone who was 65 years of age or older. The average household size was 2.15 and the average family size was 2.91.

In 1950, folklorist Patrick Gainer established the West Virginia State Folk Festival at the college. It has been held each June since then, making it one of the two oldest such events in the United States.

The climate in this area is characterized by hot, humid summers and generally mild to cool winters. According to the Köppen Climate Classification system, Glenville has a humid subtropical climate, abbreviated "Cfa" on climate maps.

All content from Kiddle encyclopedia articles (including the article images and facts) can be freely used under Attribution-ShareAlike license, unless stated otherwise. Cite this article:
Glenville, West Virginia Facts for Kids. Kiddle Encyclopedia.