Harrison County is a county in the U.S. state of West Virginia. As of the 2010 census, the population was 69,099. The county seat is Clarksburg. The county was founded in 1784.

Harrison County was created in 1784, formed from Monongalia County and named for Benjamin Harrison V, who had recently retired as the Governor of Virginia. (He was the father of William Henry Harrison, 9th President of the United States and great-grandfather of Benjamin Harrison, 23rd president.) From the vast territory that was called “Harrison County” in 1784 were carved, over the next 72 years, all of eight present day West Virginia counties and parts of ten others.

The first meeting of the Harrison County court was held on July 20, 1784 at home of George Jackson. One of the first orders of business was to select a permanent county seat. It was decided to move the county seat to Clarksburg. The town, named in honor of the explorer General George Rogers Clark (1752–1818), was chartered by the Virginia General Assembly in October 1785, and it was incorporated in 1795.

Clarksburg's first newspaper, The By-Stander, began publication in 1810. Clarksburg began to grow following the construction of the Northwestern Turnpike connecting Winchester and Parkersburg, which reached it in 1836. Clarksburg's economic development was also helped by the arrival of the Baltimore and Ohio Railroad in 1856. The railroad was instrumental in the development of the local coal mining industry during the late 1800s and early 1900s. 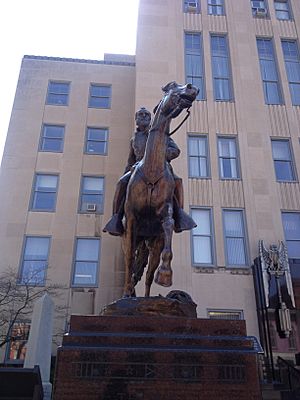 Views of Main Street in Clarksburg (left) and the Benedum Civic Center in Bridgeport (right). Clarksburg and Bridgeport are the largest cities in Harrison County. 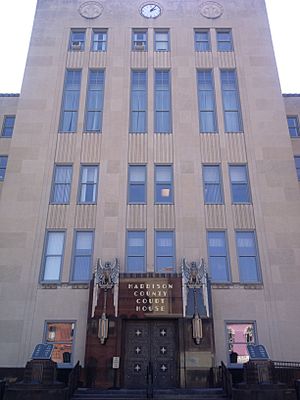 Harrison County is the site of a master-planned community, Charles Pointe, which is currently under construction in the city of Bridgeport, WV and comprises 1,700 acres (6.9 km2) that will combine commercial, residential, and recreational areas into one master-planned community. Adjacent to Charles Pointe, the new United Hospital Center, a $278 million state-of-the-art medical facility, is also currently being constructed. Directly across from the United Hospital Center site, White Oaks, a planned business community is also under way, and will support the new hospital and the FBI CJIS complex, which is also located nearby to the White Oaks site. This area of West Virginia's Interstate 79 is considered part of a "High Tech Corridor."

All content from Kiddle encyclopedia articles (including the article images and facts) can be freely used under Attribution-ShareAlike license, unless stated otherwise. Cite this article:
Harrison County, West Virginia Facts for Kids. Kiddle Encyclopedia.