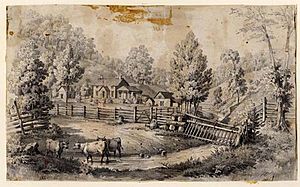 Doddridge County is a county in the U.S. state of West Virginia. Its county seat is West Union.

The area that became Doddridge County, Virginia — now West Virginia — was first settled in the late 1780s by James Caldwell, who owned 20,000 acres (81 km2) of land that included present West Union. Caldwell sold this land to Nathan Davis, Jr (1772-1866) and his brothers about 1807. They in turn sold 16,000 acres (65 km2) to Lewis Maxwell (1790-1862), a Virginia Assembly delegate in the 1820s who later became a U.S. Congressman. In 1828 Ephraim Bee, Sr (1802–1888) and his wife Catherine established a log home on Meathouse Fork of Middle Island Creek, now part of West Union. They built an Inn across the "Creek" (really a river) at what was then called Lewisport (Congressman Maxwell's namesake), below a blockhouse on the Northwestern Turnpike. The "Beehive Inn" became a popular place for travelers and locals to meet, refresh themselves and re-provision. Bee operated the first local blacksmith shop; a farm, stables, tannery and horse-racing track soon followed.

According to Ephraim's father, A.A. Bee: "The first bridge across Middle Island Creek [at West Union] was of hewed logs with a center abutment of stones. In the great flood of 1835 it was washed away". In 1842, a contract was awarded to the well-known civil engineer Claudius Crozet to build a covered bridge at West Union, as part of a series of public works along the Turnpike. Ephraim Bee was by this time a district officer, magistrate, state legislator, hotelier, and postmaster. As blacksmith, he made all the bolts and bands for the West Union Covered Bridge, completed in 1843.

Doddridge County was officially created in 1845 from parts of Harrison, Tyler, Ritchie, and Lewis Counties of what was then still Virginia. It was named for Philip Doddridge (1773–1832), the late distinguished statesman of western Virginia, who had spent the greater part of his life in Brooke County. When it was announced the new county would be formed, Ephraim Bee rallied to locate the county seat at Lewisport. But Nathan Davis, Jr (who was Ephraim's wife's uncle), William F. Randolph, and others, won out in favor of West Union, across the river on the south side. There Ethelbert Bond laid out the town lots in regular fashion on land formerly owned by Davis.

Maxwell Ridge — named for the Congressman's family — is said to have a cave (Gatrell Cave) that was used by the Underground Railroad in the years leading up to the Civil War. Another nearby grotto, Jaco Cave, is said to have been used for the same purpose.

The county seat of West Union was incorporated on 20 July 1881.

Doddridge County’s oil and gas industry was an enormous boon to residents. The county's first oil pool, at Center Point, was discovered ("brought in" as it was then termed) and drilled in 1892. This was an extension of the technology and boom of the western Pennsylvania oil and gas fields into Tyler and Doddridge Counties. Many farm owners, and sons of farm owners, split their time between their farmwork and the petroleum operations. Almost every local farm benefited from this as free gas was piped to the farmhouses of many landowners. Gas was soon used for heating, lighting, and cooking, which replaced the wood stoves and kerosene and candles of previous generations. By 1906, the Ideal Glass Factory opened to take advantage of the abundant natural gas. It was followed by the Doddridge County Window Glass Company. The two plants employed about 300 people. In later years a garment factory opened, but closed in the 1970s.

A long-remembered flood devastated West Union in June 1950, destroying homes and businesses and killing more than 20 people throughout the county. (One casualty was the 107-year-old covered bridge.)

Today farming, timbering, oil and gas, and the business of county government and public education support the area, and many people commute to jobs in Salem, Clarksburg, and Parkersburg, or to the North Central Regional Jail in Greenwood.

All content from Kiddle encyclopedia articles (including the article images and facts) can be freely used under Attribution-ShareAlike license, unless stated otherwise. Cite this article:
Doddridge County, West Virginia Facts for Kids. Kiddle Encyclopedia.