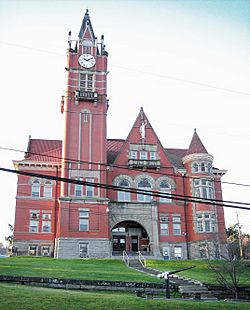 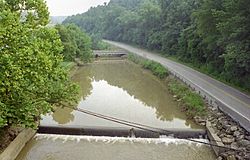 West Union, incorporated July 20, 1881, is a town in Doddridge County, West Virginia, United States. The population was 825 at the 2010 census. It is the county seat of Doddridge County. The town is located along Middle Island Creek at the junction of U.S. Route 50 and West Virginia Route 18; the North Bend Rail Trail also passes through the town.

The settlement was originally called Lewisport, but Davis later supposedly suggested the name of "West Union", in deference to a proposed town of Union to be built on the eastern side of Middle Island Creek. (Union has disappeared, if it ever existed.) According to an early resident, A.A. Bee: "The first bridge across Middle Island Creek [at West Union] was of hewed logs with a center abutment of stones. In the great flood of 1835 it was washed away". In 1842, a contract was awarded to the well-known civil engineer Claudius Crozet to build a new covered bridge at West Union, as part of a series of public works along the Northwestern Turnpike. Ephraim Bee (1802–1888), a local blacksmith (who was also a district officer, magistrate, state legislator, hotelier, and postmaster at various times) made all the bolts and bands for the West Union Covered Bridge which was completed in 1843.

On the night of March 27th, 1858, a fire utterly devastated the town of West Union. At the time, many of the citizens were attending the U.S. court at Clarksburg, and so were not available for fire suppression efforts. The fire originated in an upper room of the residence of Lathrop Russell Charter. The flames spread quickly to other buildings: first, a large hotel and store room belonging to James A. Foley. Next came the residence of Ethelbert Bond and a storehouse belonging to Arthur Ingram. Other buildings followed and the next morning the entire settlement appeared a "mass of smoldering ruins". The Parkersburg and Grafton branch of the Baltimore and Ohio Railroad had just been completed, however, and the town was able to revive economically and structurally fairly quickly.

Nearby Maxwell Ridge — named for the family of Congressman Maxwell — is said to have a cave that was used by the Underground Railroad in the years leading up to the Civil War.

Doddridge County’s oil and gas industry was a boon to West Union. By 1906, the Ideal Glass Factory opened to take advantage of the abundant gas. It was followed by the Doddridge County Window Glass Company. The two plants employed about 300 people. In later years a garment factory opened, but closed in the 1970s. A long-remembered flood devastated West Union in June 1950, destroying homes and businesses and killing more than 20 people throughout the county. (One casualty was the 107-year-old covered bridge.)

Today farming, timbering, oil and gas, and the business of county government and public education support the area, and many people commute to jobs in Salem, Clarksburg, and Parkersburg, or to the North Central Regional Jail in Greenwood.

The climate in this area is characterized by hot, humid summers and generally mild to cool winters. According to the Köppen Climate Classification system, West Union has a humid subtropical climate, abbreviated "Cfa" on climate maps.

There were 362 households, of which 29.0% had children under the age of 18 living with them, 43.1% were married couples living together, 12.4% had a female householder with no husband present, 4.4% had a male householder with no wife present, and 40.1% were non-families. 38.1% of all households were made up of individuals, and 19.6% had someone living alone who was 65 years of age or older. The average household size was 2.28 and the average family size was 2.96.

All content from Kiddle encyclopedia articles (including the article images and facts) can be freely used under Attribution-ShareAlike license, unless stated otherwise. Cite this article:
West Union, West Virginia Facts for Kids. Kiddle Encyclopedia.