Salem is a city in Harrison County, West Virginia, United States. The population was 1,586 at the 2010 census. It is located at the junction of U.S. Route 50 and West Virginia Route 23; the North Bend Rail Trail passes through the city. Salem University is located in Salem.

According to the United States Census Bureau, the city has a total area of 1.34 square miles (3.47 km2), all of it land. 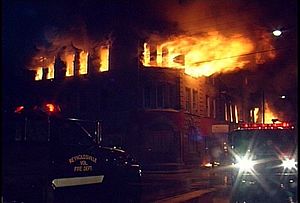 By the 1870s, the town was more frequently being called "Salem" than "New Salem", as the separation of West Virginia from Virginia in 1863 had diminished the need to distinguish it from the town named Salem near Roanoke. The US Postal Service made the change official in 1884.

Salem was incorporated by the state of West Virginia on 25 February 1905.

Salem has a history of large fires. The same full city block has burned down twice in the city's history. The north side of Main Street downtown burned once in 1901 and again on March 2, 2006. The more recent fire burned the old city bank building, several store fronts, and several residences; five structures in all were damaged. The fire was determined to have been started by a hot water tank in an apartment. The fire departments' ability to put out the blaze was hampered by a limited city water supply; they were forced to draw water from the nearby creek.

The Salem College Administration Building and Salem Historic District are listed on the National Register of Historic Places.

There were 662 households, of which 27.2% had children under the age of 18 living with them, 36.4% were married couples living together, 15.3% had a female householder with no husband present, 6.3% had a male householder with no wife present, and 42.0% were non-families. 35.3% of all households were made up of individuals, and 13.6% had someone living alone who was 65 years of age or older. The average household size was 2.23 and the average family size was 2.88. 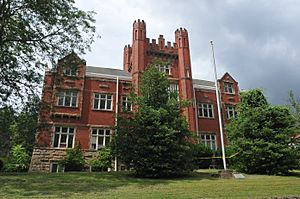 The Salem College Administration Building in 2007

Salem University is a private university in the city, founded in 1888 by Seventh Day Baptists. The Salem College Administration Building was completed in 1910 and listed on the National Register of Historic Places in 1989.

All content from Kiddle encyclopedia articles (including the article images and facts) can be freely used under Attribution-ShareAlike license, unless stated otherwise. Cite this article:
Salem, West Virginia Facts for Kids. Kiddle Encyclopedia.