Cattaraugus is a village in Cattaraugus County, New York, United States. The population was 1,002 at the 2010 census. The village lies in the northeast part of the town of New Albion, north of Salamanca,. 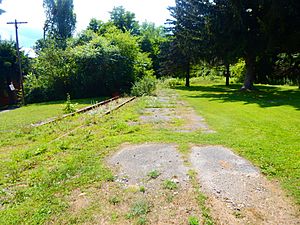 Cattaraugus station of the Erie Railroad site in August 2015

Cattaraugus developed most after the arrival of the Erie Railroad in 1851. The village was incorporated in 1882. Its name derives from Cattaraugus Creek.

The Cattaraugus Village Commercial Historic District was listed on the National Register of Historic Places in 2014.

According to the United States Census Bureau, the village has a total area of 1.1 square miles (2.9 km2), all of it land.

NY Route 353 and the South Branch of Cattaraugus Creek pass through the village. Cattaraugus County Route 12 (which follows the briefly designated NY 264 of the 1930s), the only county route in the county to enter a village, enters the village from the northeast and terminates within the village. The village is built primarily on a hillside; the southwestern portion of the village (around Route 353) is on the highest ground, while a series of side streets run downhill from Route 353 heading northeast. Only two of the village's streets run uphill from Route 353: Rumsey Street (the easternmost tip of Waite Hollow Road) on the village's southern boundary and West Street at the peak of the hill.

Since 2013, the Seneca Transit System has provided public bus service to the village.

The New York and Lake Erie Railroad terminates at a Setterstix plant in Cattaraugus after the portion of the railway southeast of Cattaraugus was decommissioned in the early 1990s. The right-of-way of the portion heading southeast from Cattaraugus is now the Pat McGee Trail, which was established in 2005.

There were 437 households out of which 34.8% had children under the age of 18 living with them, 49.2% were married couples living together, 10.5% had a female householder with no husband present, and 35.5% were non-families. 30.9% of all households were made up of individuals and 14.6% had someone living alone who was 65 years of age or older. The average household size was 2.44 and the average family size was 3.07.

All content from Kiddle encyclopedia articles (including the article images and facts) can be freely used under Attribution-ShareAlike license, unless stated otherwise. Cite this article:
Cattaraugus, New York Facts for Kids. Kiddle Encyclopedia.