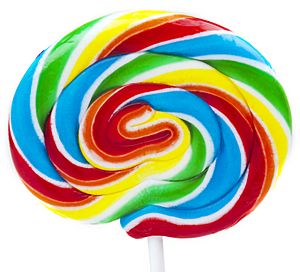 A lollipop is a type of sugar candy usually consisting of hard candy mounted on a stick and intended for sucking or licking. Different informal terms are used in different places, including lolly, sucker, sticky-pop, etc. Lollipops are available in many flavors and shapes. 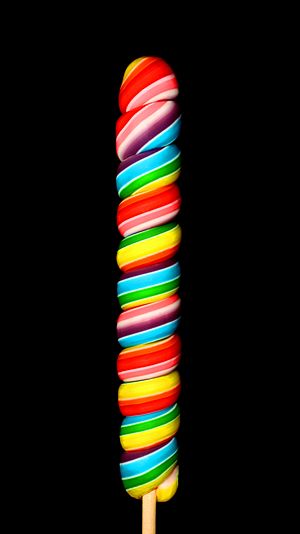 Lollipops are available in a number of colors and flavors, particularly fruit flavors. With numerous companies producing lollipops, the candy now comes in dozens of flavors and many different shapes. They range from small ones which can be bought by the hundred and are often given away for free at banks, barbershops, and other locations, to very large ones made out of candy canes twisted into a circle.

Most lollipops are eaten at room temperature, but "ice lollipops", "ice lollies", or "popsicles" are frozen water-based lollipops. Similar confections on a stick made of ice cream, often with a flavored coating, are usually not called by this name.

In the Nordic countries, Germany, and the Netherlands, some lollipops are flavored with salmiak.

Lollipops can be used to carry medicines.

Some lollipops have been marketed for use as diet aids, although their effectiveness is untested, and anecdotal cases of weight loss may be due to the power of suggestion. Flavored lollipops containing medicine are intended to give children medicine without fuss.

Actiq is a powerful analgesic lollipop whose active ingredient is fentanyl. This makes for fast action; the lollipop is used, for example, by the military, and is not a way to make medicine palatable to children. 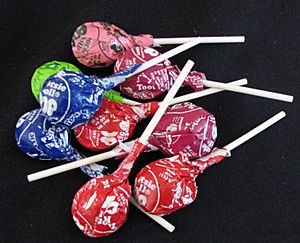 The idea of an edible candy on a stick is very simple, and it is probable that the lollipop has been invented and reinvented numerous times. The first confectioneries that closely resemble what we call lollipops date to the Middle Ages, when the nobility would often eat boiled sugar with the aid of sticks or handles.

The invention of the modern lollipop is still something of a mystery but a number of American companies in the early 20th century have laid claim to it. According to the book Food For Thought: Extraordinary Little Chronicles of the World, they were invented by George Smith of New Haven, Connecticut, who started making large boiled sweets mounted on sticks in 1908. He named them after a racehorse of the time, Lolly Pop - and trademarked the lollipop name in 1931.

The term 'lollipop' was recorded by English lexicographer Francis Grose in 1796. The term may have derived from the term "lolly" (tongue) and "pop" (slap). The first references to the lollipop in its modern context date to the 1920s. Alternatively, it may be a word of Romany origin being related to the Roma tradition of selling toffee apples sold on a stick. Red apple in the Romany language is loli phaba.

The main ingredient in a standard lollipop is sugar. Sugars are fully hydrated carbon chains meaning that there is a water molecule attached to each carbon. Sugars come in two forms; straight-chain and ring form. When sugars are in straight-chain form, aldehyde and ketone groups are open which leaves them very susceptible to reaction. In this state, sugars are unstable. In ring form, sugars are stable and therefore exist in this form in most foods, including lollipops.

Sugar is a very versatile ingredient and is used in many of food and products we consume every single day. What makes sugar different is the way it interacts with the other ingredients and systems within the food as well as how it is treated. When it is heated enough to break the molecules apart, it generates a complex flavor, changes the color, and creates a pleasing aroma. Sugar can form two types of solids in foods; crystalline and glassy amorphous. Crystalline solids can be found in food products like fondant, fudge, and butter creams. Glassy amorphous solids can be found in products like lollipops, marshmallows, and caramels. Glassy amorphous solids result when moderate sugar concentrations (50% solutions) are heated to high temperatures which nearly eliminates all moisture. The final moisture content is around 1%-2%, whereas the final moisture content in crystalline candies is 8%-12%. The non-crystalline nature of glassy amorphous solids is due to the presence of inhibitors in the solution. Without an inhibitor, crystallization would occur spontaneously and rapidly as sugar cools due to its high concentration. Some common inhibitors used in lollipop production are corn syrup, cream of tartar, honey, and butter.

The second most important ingredient in lollipop production is water. Even though at the end of the lollipop making process, the moisture content falls to less than 2%, the starting process involves water. All other ingredients used in the process of lollipop production are optional. The use of inhibitors is dependent on the type of sugar used. The amount of inhibitor in the lollipop is usually small in comparison to the amount of sugar used. On top of that, additional flavors, colorings, and inclusions (like bubble gum or a tootsie roll) can be added to the final product, but are not a part of the main structure of a simple lollipop.

All content from Kiddle encyclopedia articles (including the article images and facts) can be freely used under Attribution-ShareAlike license, unless stated otherwise. Cite this article:
Lollipop Facts for Kids. Kiddle Encyclopedia.