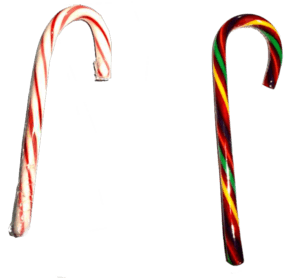 A candy cane is a hard cane-shaped candy stick. It is usually white with red stripes and tastes like peppermint. It is also made in many other flavors and colors. The candy cane is a traditional candy of the Christmas holiday in the United States, but you can find them during the rest of the year. It is a symbolic figure in the Christmas season.

In the 17th century, white sticks of candy were popular, but they were not colorful. According to legend, a choir leader in Germany asked the people that made the candy to bend the sticks so that they looked like shepherd's staffs. He then gave the candy canes to the children to keep them quiet during church services. The colors are also said to be symbolic. The white part represents purity, and the red represents the blood of Jesus.

All content from Kiddle encyclopedia articles (including the article images and facts) can be freely used under Attribution-ShareAlike license, unless stated otherwise. Cite this article:
Candy cane Facts for Kids. Kiddle Encyclopedia.