Chupa Chups (Spanish pronunciation:) is a popular Spanish brand of lollipop and other confectionery sold in over 150 countries around the world. The brand was founded in 1958 by Enric Bernat, and is currently owned by the Italian-Dutch multinational corporation Perfetti Van Melle. The name of the brand comes from the Spanish verb chupar, meaning "to suck".

In the early 1950s, Enric Bernat worked for an apple jam factory called "Granja Asturias". After he broached the idea of making lollipops, the investors left. Bernat took over the company in 1958 and renamed it Chupa Chups. He built the production machines and sold a striped bonbon on a wooden stick for one peseta each.

Bernat got the idea of his lollipops from his getting sticky hands from melting sweets. Bernat felt that at that time, sweets were not designed for children. Shopkeepers were instructed to place Chupa Chups near the cash register within reach of children's hands, instead of the usual placement behind the counter. 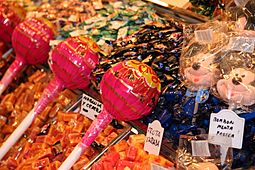 The Chupa Chups company was a success. Within five years Bernat's sweets were being sold at 300,000 outlets. When the candy was first created, the lolly sticks were made of wood but they switched to plastic sticks. After the end of the Francisco Franco dictatorship (1939–75), the self-funded private company went international.

In the 1970s the lollipops appeared in Japan and Southeast Asian countries such as Indonesia, Singapore, Philippines and Malaysia, as well as Australia. In the 1980s it expanded to the European and North American markets, and in the 1990s to most Asian countries, including South Korea.

The Chupa Chups logo was designed in 1969 by the artist Salvador Dalí. Its first marketing campaign was the logo with the slogan "És rodó i dura molt, Chupa Chups", which translates as "It's round and long-lasting". Later, celebrities like Madonna were hired to advertise.

Chupa Chups have a vast array of products with their standard lollipop the most renowned.

All content from Kiddle encyclopedia articles (including the article images and facts) can be freely used under Attribution-ShareAlike license, unless stated otherwise. Cite this article:
Chupa Chups Facts for Kids. Kiddle Encyclopedia.