Kids Encyclopedia Facts
This page is about the region of New York. For the region of the United States that is sometimes referred to by this term, see Deep South.

The Southern Tier is the counties of New York west of the Catskill Mountains along the northern border of Pennsylvania. It generally includes the counties that border Pennsylvania west of Delaware County, but definitions of the region vary widely.

The region is bordered to the south by the Northern Tier of Pennsylvania, and together these regions are known as the Twin Tiers.

The eight counties almost always included in the Southern Tier are:

Often but less frequently included in the "Southern Tier" designation are Schuyler County, Yates County (the regional sentiment is stronger throughout the southern portions of Yates county, such as the village of Dundee), Cortland County, Tompkins County, and (far more rarely, except for Chenango) Schoharie County, Chenango County, and Otsego County (the last three of these, along with Broome County, are also commonly considered part of the tourist designation "Central Leatherstocking Region"), however Schoharie County is also listed as part of the Capital District. At least one definition used by the state Department of Transportation includes Sullivan County, which usually isn't included in other definitions. The National Weather Service office in Buffalo occasionally includes Wyoming County and, more rarely, Southern Erie County in its definition.

The Encyclopedia of New York State lists only Chautauqua, Cattaraugus, Allegany, and Steuben Counties as part of the Southern Tier, with anything east of that being considered Central New York. Other definitions define it as comprising the combined Corning-Elmira-Binghamton Metropolitan Statistical Areas, which includes Steuben, Chemung, Tioga and Broome Counties but not Chautauqua, Cattaraugus or Allegany, which are considered Western New York.

In virtually all contexts, the Southern Tier is considered a part of the broader Upstate New York region. 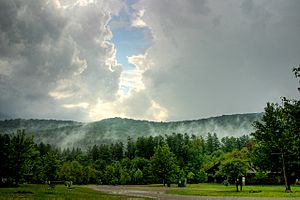 The Southern Tier is generally hilly without being mountainous (with the exception of the Catskill mountains). This can range from low rolling hills to more steep and rugged cliffs and valleys. Both the Delaware and Susquehanna rivers flow through the Southern Tier in their upper reaches, as does the Allegheny River in the western Southern Tier.

The Southern Tier makes up the northernmost portion of Appalachia and lies on the Allegheny Plateau. It is defined on its western boundary by the Chautauqua Ridge in Chautauqua County, and including this ridge and extending eastward across the northern bounds of the region, the continental divide between the Great Lakes and the Mississippi River watersheds exists. The Eastern Continental Divide runs directly through the region, in Steuben County.

The Southern Tier has long been home to the people of the Iroquois Confederacy. There were major settlements along the Allegheny River in Cattaraugus County (which the Senecas acquired by defeating the Wenrohronon during the Beaver Wars in 1638), at Painted Post in Steuben County, at what is today the northeast side of Corning, New York. The Seneca Nation has a reservation today along the Allegheny River and a headquarters at Salamanca. There are also Indian lands (with no current Indian residents) on Cuba Lake in Allegany County.

The colonies that eventually became the states of New York, Massachusetts and Pennsylvania all laid claim to the Southern Tier at various points in the 17th and 18th Centuries, while not making any significant attempt to settle the territory.

The region was quickly settled by whites after the Revolutionary War, when settlers were again allowed west of the Appalachian divide. The Southern Tier shared in the economic growth of the early 19th century, but its hilly terrain made it less suitable to canal-building, and later, railroading, than the more level corridor to the north between Albany and Buffalo. There was an attempt at a Genesee Valley Canal in the western half, and in the eastern half, the Chemung and Chenango Canals did connect the Erie Canal to Elmira and Binghamton respectively. Beset by financial and technical difficulties, the latter two canals nonetheless were important catalysts for economic growth, and indeed for the construction of the railroads that would supplant them. Plans to connect these canals to the Pennsylvania Canal system, thus making them much more than feeders to the Erie Canal, never came to fruition.

Railroads did arrive and the Erie Railroad, which followed the water-level of the Allegheny, Susquehanna and Delaware watersheds accelerated industrial progress in the region about the time of the American Civil War. The railroad and available fuel from the region's dense forests attracted Corning Glass Works to Steuben County in 1868.

The region became home to prosperous farms and small factory towns (with the exception of larger Binghamton) during the first half of the 20th century. But declines in U.S. manufacturing hit the region hard and it suffered even more than other parts of upstate New York and northern Pennsylvania.

For two decades, the region has tried to remake itself as a tourist destination and relocation area for retirees from big Northeastern cities. Meanwhile, agriculture and manufacturing struggle to compete regionally and globally.

The Greater Binghamton Airport has flights to Detroit, Philadelphia, and Washington, DC. Elmira-Corning Regional Airport also serves the area with flights to Philadelphia, Detroit, and other Northeastern hubs, and Chautauqua County-Jamestown Airport currently operates Essential Air Service to Pittsburgh. Bus service is provided along the entire I-86/NY 17 corridor by Coach USA's Shortline/Erie services from Jamestown to New York City and Buffalo, and Trailways connects the Southern Tier with Buffalo, Dubois (at the western end in Salamanca), Sunbury/Lock Haven (at Elmira), and Syracuse, Albany and Harrisburg (at Binghamton). A somewhat unorganized network of municipally operated public transportation services operate local and limited intercity bus services between Salamanca and Elmira.

Until the demise of long-distance passenger rail service in the United States in the 1950s and 1960s, the Erie Railroad operated passenger trains in the region, with Chicago, Illinois as the western terminus and Jersey City, New Jersey as the eastern terminus, with ferry connections to New York City.

All content from Kiddle encyclopedia articles (including the article images and facts) can be freely used under Attribution-ShareAlike license, unless stated otherwise. Cite this article:
Southern Tier Facts for Kids. Kiddle Encyclopedia.