Hornell is a city in Steuben County, New York, United States. The population was 8,563 at the 2010 census. The city is named after the Hornell family, early settlers.

The City of Hornell is surrounded by Town of Hornellsville. Hornell is about 55 miles (89 km) south of Rochester and is near the western edge of Steuben County.

Hornell is nicknamed the "Maple City" after the large maple trees that once grew throughout the town and covered the surrounding hills of the Canisteo Valley. Hornell has the largest Saint Patrick's Day parade and celebration in the area, bringing many out to welcome spring and show their green.

Hornell Municipal Airport (KHTF) is located a few miles north of the city on Route 36. 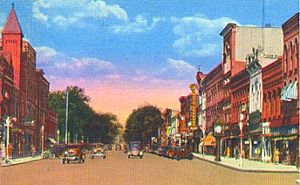 What is now Hornell was first settled in 1790 under the name "Upper Canisteo", to distinguish it from the community of Canisteo, then known as "Lower Canisteo". The family of Benjamin Crosby were the first settlers in what is now Hornell. The area was incorporated as a town in 1820, as "Hornellsville." The name comes from early settler George Hornell Jr, who built the first gristmill here. 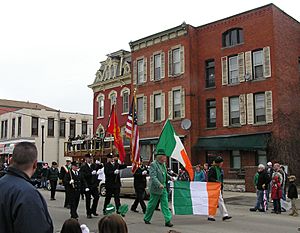 Major flooding in 1935 put parts of the city under water, prompting the creation of a system of levees to prevent future serious flooding issues.

The former city park, Union Park, was destroyed by the urban renewal of the 1970s.

In 1950, Hornell had a population near 16,000 people. It had two radio stations, WWHG and WLEA, and three movie theaters, the Steuben and the Majestic, located on Broadway, and the Hornell, located on Main Street.

The current mayor of Hornell is Democrat Shawn Hogan, who has held the position since January 1986. Hogan is the longest-serving current mayor in New York State. 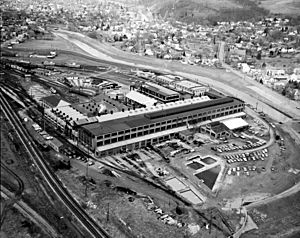 The New York and Erie Railroad arrived in Hornell in 1850, which connected New York City and Dunkirk on Lake Erie via a Southern Tier route. Another route, the Buffalo and New York City Railroad, was added in 1852, branching from Hornell northwestward to Buffalo. For the next hundred years Hornell enjoyed prosperity with its steam engine shop doing the repairs for the entire Erie railroad line. In 1960 the Erie merged with the Lackawanna, and the Hornell repair shop was closed, with repair operations consolidated at the Lackawanna's Scranton facility. The railroad then came upon hard times as trucking picked up more and more of the freight business. In 1972, the company filed for bankruptcy. Just a few days later floods from Hurricane Agnes destroyed about 200 miles (320 km) of roadbed along the Canisteo River, removing all hope of reoperating the railroad line south of Hornell.

Hornell has today (2014) half the population it had in 1960. As the population dropped businesses closed; civic institutions such as churches were also affected. 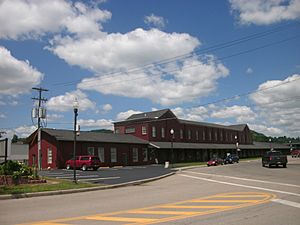 Hornell has struggled to regain its former prosperity. The former Erie shops are now Alstom's main North American assembly and manufacturing site for the production of AC traction motors, railway cars, and passenger locomotives. Car bodies are shipped disassembled from São Paulo, Brazil and assembly into cars takes place in Hornell. Prior to Alstom, the shops were operated by Morrison Knudsen. After a difficult period Alstom Transport won a contract worth $194 million USD to execute the complete overhaul of Philadelphia's Port Authority Transit Corporation (PATCO) light rail fleet, beginning in 2011. In 2013, the Alstom facility was contracted to build 34 light rail vehicles for delivery to Ottawa by 2018.

Hornell's central layout was changed significantly by the construction of the New York Route 36 arterial in the 1970s. Prior to that, Route 36, Hornell's main north-south highway, was routed along Seneca Street (to the north) and Canisteo Street (to the south). Neither of these streets was adequate for the increased automobile and truck traffic which accompanied the decline of the railroad, and they could not be easily expanded; Canisteo Street also had a significant bottleneck where the route went under the Erie Railroad tracks, just south of downtown. Route 36 between Hornell and Canisteo, also inadequate, could not be expanded due to the adjacent Canisteo River. The decision was made to replace the route with an arterial, west of Seneca Street on the north side, crossing the downtown and exiting Hornell east of Canisteo Street on the south side. The four-lane route was continued to Canisteo, at a higher and geographically better location than the old route. Unconnected fragments of the former Route 36 from Hornell to Canisteo survive; in Hornell it starts from East Avenue, east of the river, and in the Town of Canisteo it is today McBurney Road.

The impact of the relocation of Route 36 on central Hornell was profound. Much of the south end of the downtown was destroyed. Seneca Street and Broadway, formerly important commercial streets, became deserted. Part of the city's central park (Union Park) was taken for the highway, with the remainder paved to create public parking lots. Canisteo Street became unconnected at both ends.

When the decision was made in the 1960s to upgrade the western portion of New York Route 17 to expressway status, it was decided to route the expressway through the Hornell area, as it was considered to have more prospects for development than Greenwood and Jasper, along the old route (now New York Route 417). Interstate 86 crosses Route 36 between Hornell and Arkport. It is today Hornell's main highway.

According to the United States Census Bureau, the city has a total area of 2.7 square miles (7.0 km2), all of it land. 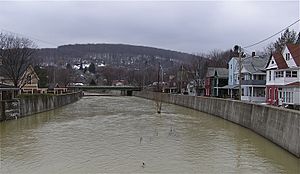 Canacadea Creek, a tributary of the Canisteo River in a residential neighborhood of Hornell.

Hornell is on the Canisteo River and surrounded by the foothills of the Allegheny Mountains.

The City is served by two railroads - it is on the Norfolk Southern's Buffalo-East Coast mainline and is the eastern terminus of the mainline of the Western New York and Pennsylvania Railroad.

There are several parks in the city of Hornell including:

Hornell is served by buses operated by Hornell Area Transit.

There are four public schools and one private school located in Hornell.

(The North Hornell School is physically located in the village of North Hornell, but is still a part of the Hornell City School District).

The current Superintendent of Schools is Jeremy Polatti In June 2007 the Hornell Evening Tribune newspaper announced that a school planning committee is proposing a $100 million project to re-organize the schools and improve assessment results. 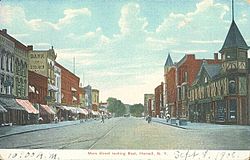 All content from Kiddle encyclopedia articles (including the article images and facts) can be freely used under Attribution-ShareAlike license, unless stated otherwise. Cite this article:
Hornell, New York Facts for Kids. Kiddle Encyclopedia.