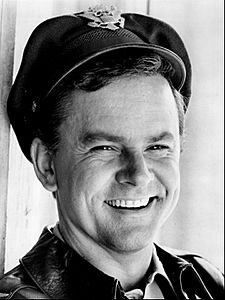 Crane was born on July 13, 1928 in Waterbury, Connecticut. During World War II he played in his own jazz band to raise money for war bonds. After the war he changed to classical music and played in the Connecticut Symphony Orchestra. He became a disc jockey in Connecticut, then later Los Angeles. Soon he was the premier morning drive time radio talk show host. Crane interviewed popular celebrities such as Frank Sinatra, Bob Hope and Marilyn Monroe.

Crane moved to television and played "Dr. Dave Kelsey" on the Donna Reed Show. He guest starred on shows such as the Twilight Zone and the Dick Van Dyke Show. In 1965 Crane finally got his own sitcom, Hogan's Heroes. It was an immediate success. The series ran for six years. The 180-plus episodes were syndicated and are still being shown today. Crane earned two Emmy nominations for Best Actor in a Comedy Series in 1966 and 1967. When Hogan's Heros was cancelled in 1972 Crane's career slowed down. He began acting in dinner theater productions. In 1975 he returned to television with the Bob Crane show. NBC cancelled it after 13 weeks.

All content from Kiddle encyclopedia articles (including the article images and facts) can be freely used under Attribution-ShareAlike license, unless stated otherwise. Cite this article:
Bob Crane Facts for Kids. Kiddle Encyclopedia.