Johnson City is a village in Broome County, New York, United States. The population was 15,174 at the 2010 census. It is part of the Binghamton Metropolitan Statistical Area.

In January 2007, a group of residents organized a petition supporting dissolution of the village for tax reasons. A vote was held on November 3, 2009. On November 12, 2009, the results came back "no" for dissolution by just 42 votes.

Johnson City is on the north side of the Susquehanna River. 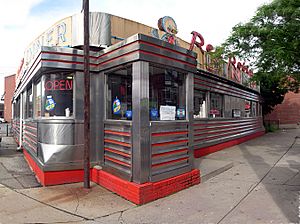 Your Home Library, founded in 1917, serves the village of Johnson City and the surrounding area.

The library building was originally the old Brigham homestead, erected by Elijah Brigham in 1850. The old farmhouse was of wooden construction but was later replaced by a much finer homestead. The new homestead was erected in 1885, and its foundations, walls, and partitions were constructed using brick from the Brigham Brick Yard, situated just north of the library building. The building was chosen by Harry L. Johnson and the Endicott Johnson Corporation as the site of the present library.

In 1920, a large addition was built and the children's room, dining rooms, and kitchen were removed to the new wing of the building. The library was owned, and entirely supported, by the Endicott Johnson Corporation until September 1921 when it was incorporated.

In 1938, the library building was purchased by the Village of Johnson City. It was listed on the National Register of Historic Places in 2005.

All content from Kiddle encyclopedia articles (including the article images and facts) can be freely used under Attribution-ShareAlike license, unless stated otherwise. Cite this article:
Johnson City, New York Facts for Kids. Kiddle Encyclopedia.