Vestal is a town within Broome County in the Southern Tier of New York, United States, and lies between the Susquehanna River and the Pennsylvania border. As of the 2010 census, the population was 28,043.

Vestal is on the southern border of the county and is west and southwest of Binghamton.

Vestal is home to Binghamton University which draws visitors to the town through its entertainment and sporting events. The university adds thousands of students to the town and employs more than 3,000 faculty and staff.

The first European settlers arrived in Vestal around 1785.

The central area of Vestal, near Route 26 at Choconut Creek, was the site of an indigenous village of the Ochugnut tribe of the Tuscarora people. During the American Revolution, a squad of soldiers from the Sixth Massachusetts Regiment, under the command of Lt. William McKendry were sent to engage the tribes, when possible, and destroy their homes and crops. During the summer of 1779, the squad did burn at least two villages without encountering resistance, including one situated in what is now nearby downtown Binghamton (the Chenango, at the confluence of the Chenango and Susquehanna rivers), and the Ochugnut (Choconut) at the site of Choconut Creek near present-day Vestal High School.

This campaign during the American Revolution was initiated following Indigenous predations against settlers, presumed to have been carried out by tribes forming part of the Iroqouis alliance. This hostile activity against settlers was encouraged by the British. However, some evidence indicates that at least some of the indigenous people were actually Tuscarora - descendants of the Cherokee who fled from North Carolina after wars in 1711 and the War of 1763. This community was actually sympathetic to the American cause, siding against the rest of the Iroquois confederation. See Sullivan Expedition or external links for more information on the role of Upstate New York in this conflict.

Following the war, several European families settled in the area near the town of Union. The town of Vestal was formed from the southern half of Union in 1823.

The history of the town is closely related to its neighbors, Binghamton, Endicott, and Johnson City. During the 20th century, Vestal served as a residential suburb to emerging industries in its area, such as Endicott Johnson Corporation, IBM, and Lockheed Martin.

In 1955, Harpur College began to plan its current location in Vestal. This move was complete by 1961. The 387-acre (1.57 km2) site was purchased from Hazard Lewis Farms, a local dairy, anticipating future growth for the school. Founded as "Triple Cities College of Syracuse University" in Endicott, the college has become Binghamton University, the highest ranked public university in the Northeastern United States. The university adds 14,000 students to the local population each school year, and draws large numbers into the town for sporting, arts and other events.

The Kopernik Observatory & Science Center is a public observatory in Vestal opened to the public on 16 June 1974 by the Kopernik Society of Broome County to commemorate the 500th anniversary of the birth of the astronomer Nicolaus Copernicus (Polish: Mikołaj Kopernik) in 1973. It is one of the best-sited and best equipped public observatories in the Northeast United States.

During the 1990s, Vestal became the major retail center of the Southern Tier region of New York, with many large shopping centers such as the Town Square Mall, Parkway Plaza, Shoppes at Vestal, and Campus Plaza being built along the Vestal Parkway (NY Route 434), which became one of the busiest roads in the area. Vestal's historic central business district is located along three blocks of Front Street, still lined with small shops.

The Drovers Inn and Round Family Residence and Vestal Central School were listed on the National Register of Historic Places in 2010. 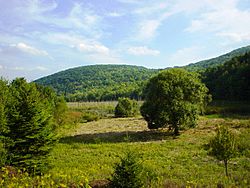 According to the United States Census Bureau, the town has a total area of 52.6 square miles (136.2 km2). 51.7 square miles (134.0 km2) of it is land, and 0.85 square miles (2.2 km2) of it (1.62%) is water. The town of Vestal is on the south side of the Susquehanna River. The Susquehanna River flows westward past Vestal to towns like Owego and Waverly in Tioga County, New York. From there, the river bends southward into Pennsylvania through Wilkes-Barre and Harrisburg, eventually flowing into the Chesapeake Bay at Havre de Grace, Maryland. 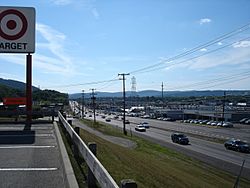 Retail along the Vestal Parkway

Broome County Transit provides Vestal with bus service around the town and to surrounding municipalities. Greater Binghamton Airport is located about 7 miles (11 km) to the north in the town of Maine and provides direct flights to Detroit and Philadelphia.

The town of Vestal has 21 town-operated and -maintained parks which cater to all ages. 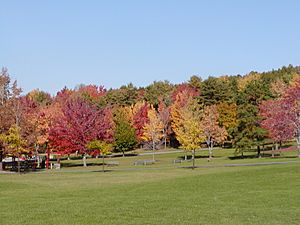 Arnold Park in the Fall

The largest park in the area is Arnold Park located off Pierce Hill Road. This park offers a newly constructed plastic playground, picnic areas, a sand volleyball court, a standard sized baseball field and three other large grassy areas, as well as a nature trail through the wooded areas surrounding the park. In October, the Recreation Department holds a Halloween event at the park. In August, the Recreation Department hosts a picnic and summer festival. The Recreational Baseball League hosts at this park a variety of competitions amongst leagues.

The Town of Vestal recognizes five hamlets within its borders:

All content from Kiddle encyclopedia articles (including the article images and facts) can be freely used under Attribution-ShareAlike license, unless stated otherwise. Cite this article:
Vestal, New York Facts for Kids. Kiddle Encyclopedia.