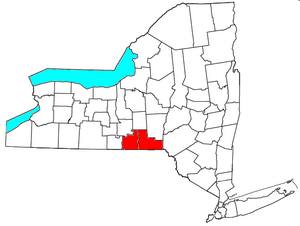 Location of the Binghamton Metropolitan Statistical Area in New York

The Binghamton Metropolitan Statistical Area, also called Greater Binghamton or the Triple Cities, is a region of southern upstate New York in the Northeastern United States, anchored by the city of Binghamton. The MSA encompasses Broome and Tioga counties, which together had a population of 251,725 as of the 2010 census. From 1963 to 1983, the MSA also included neighboring Susquehanna County in Pennsylvania, part of which still falls in the Binghamton, NY–PA Urban Area. In addition to these three counties, the greater region includes parts of Delaware and Chenango counties in New York; portions of Cortland and Otsego counties in New York and Wayne County, Pennsylvania are sometimes considered part of the region as well. Using the definition of a 30-mile radius from Binghamton, the population as of the 2010 census is 317,331.

The Greater Binghamton name was adopted in the early 21st century to better identify the region with its most well-known city in efforts of marketing and external promotion.

Historically, the region has been known as the Triple Cities and is made up of Binghamton, Johnson City, and Endicott, New York, the latter two of which are technically villages.

The area is also sometimes called the "Greater Binghamton Area" as the city of Binghamton is the largest and most prominent of the three, with a population greater than the other two combined, and a much larger geographical area. The three incorporated areas are tightly squeezed together and can seem like a single large, albeit spread out, city. They are economically integrated, though they retain their political identities. For example, many people living in Binghamton go shopping at the Oakdale Mall in Johnson City on a regular basis, and it's very common for someone living in one city to work or go to school in one of the other two.

Some have put forward the idea of merging the three into a single city, but it seems politically unlikely. While "triple cities" strictly covers only the three main municipalities mentioned, the term is also used by some to refer broadly to the surrounding area of conurbation, including Endwell, West Corners, the Upper Front Street area (technically in the town of Dickinson), and the town of Vestal. Vestal is home to the Vestal Parkway, a major commercial strip for the entire area, housing one of the two major multiplex theaters in the area, and a number of shopping plazas, major chain stores, and eateries. Binghamton University is also physically located in Vestal, though its mailing address is in Binghamton.

The Municipalities all sit together, parallel to the Southern Tier Expressway (NY 17, the main part of future Interstate 86). This along with a junction to Interstate 81, Interstate 88, and U.S. Route 11 along with New York State Route 12, form the main transportation routes for the area. NY 17, and I-81 are the high-speed roadways providing quick expressway access between the cities, while the other two serve as secondary gateways to the area. Interstate 88 starts between exits 5 and 6 on I-81 and terminates in Albany.

In addition, Greater Binghamton Airport is located in Maine, New York. Several commercial carriers have scheduled flights from the airport.

All content from Kiddle encyclopedia articles (including the article images and facts) can be freely used under Attribution-ShareAlike license, unless stated otherwise. Cite this article:
Binghamton metropolitan area Facts for Kids. Kiddle Encyclopedia.