Richford is a town in Tioga County, New York, United States. The population was 1,172 at the 2010 census. The town is named after Ezekial Rich, an early settler and benefactor of the town.

The Town of Richford is the northernmost town in the county and is southeast of Ithaca.

Settlement began around 1808 when Evan Harris brought his family here. Samuel Smith was the first to settle within the present village site in 1813. The first tavern was built in the village in 1817 at the site of the Richford Hotel (now the Richford Quickway) by Beriah Wells. Ezekial Rich moved to the town in 1821 when he purchased the tavern from Beriah Wells. He established a glove and mitten factory, and later opened a general store. The town was first formed from the Town of Berkshire as the "Town of Arlington" in 1831. In 1832 it changed its name to the Town of Richford.

In 1816, the Catskill Turnpike was brought through the village on its route to Ithaca bringing considerable traffic to the village. This was the dominant route into or out of the village until 1869, when the Southern Central rail line was completed between Auburn and Owego.

The West Branch of the Owego Creek forms the western border of the town while the East Branch runs along the eastern edge of the village itself at the base of Geer Hill. Several spring-fed ponds exist on the hilltops, especially at Clarks.

The western border is with Tompkins County. The north border is Cortland County, and the east border is Broome County. Berkshire lies to the south.

There were 440 households, out of which 34.8% had children under the age of 18 living with them, 53.2% were married couples living together, 12.3% had a female householder with no husband present, and 28.4% were non-families. 22.3% of all households were made up of individuals, and 8.6% had someone living alone who was 65 years of age or older. The average household size was 2.66 and the average family size was 3.09.

Named in honor of the Clarks Seed Farm, this festival is held every year on the third Saturday of September to celebrate the significance of potato farming in Richford's history. Arts and crafts vendors are available as are games and races. The event is known for its potato themed dishes including potato ice-cream, which used to be made by Cornell University dairy with chocolate-covered potato sticks in vanilla ice cream. Now there are two varieties made by Jones' Humdinger: the original and a mashed sweet potato based version.

Richford has over 4,700 acres (19 km2) of state lands, more than all other towns in Tioga County combined, mostly contained in six large state forests. 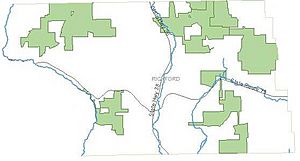 The large number of state-owned lands provide for excellent hiking and motorized sports activities. Many 4-wheeler and snowmobile tracks criss-cross the woodlands on both state and private land.

Many great fishing sites are available in Richford. Native and stock trout thrive in the cold waters of both branches of the Owego Creek with some of the best areas in and around Richford. The NYSDEC annually releases over 10000 brown trout into both branches in Richford. Additionally, 200 rainbow trout are released into the Tri-County Pond.

Hunting is also popular within the town. All state lands are open to hunting and provide excellent habitats to large populations of deer, turkey, and other game animals.

Communities and locations in Richford 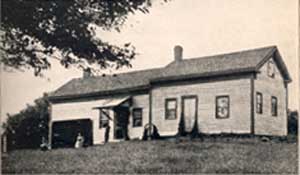 The birthplace of John D. Rockefeller

All content from Kiddle encyclopedia articles (including the article images and facts) can be freely used under Attribution-ShareAlike license, unless stated otherwise. Cite this article:
Richford, New York Facts for Kids. Kiddle Encyclopedia.