Waverly is the largest village in Tioga County, New York, United States. According to the 2010 U.S. Census, Waverly had a population of 4,177. It is located southeast of Elmira in the Southern Tier region. This village was incorporated as the southwest part of the town of Barton in 1854. The village name is attributed to Joseph "Uncle Joe" Hallett, founder of its first Fire Department and pillar of the community, who conceived the name by dropping the second "e" from the name of his favorite author's novel, Waverley by Sir Walter Scott. The former village hall is listed on the National Historic Places list.

Waverly is part of the Binghamton Metropolitan Statistical Area. The village, formerly less of a backwater as one regular stop of the Black Diamond Express passenger service, is also in a mid-sized rust belt community known as the Penn-York Valley, once a thriving railroad company town spanning counties in cross border Pennsylvania as well — a group of four contiguous communities in New York and Pennsylvania: Waverly, NY; South Waverly, PA; Sayre, PA, and Athens, PA — with Waverly part of one continuous Susquehanna valley bounded strip city, with a combined population near 30,000. As of the 2010 Census, the village had a total population of 4,444. 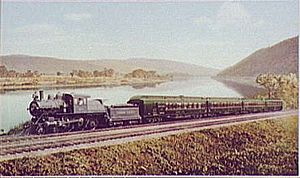 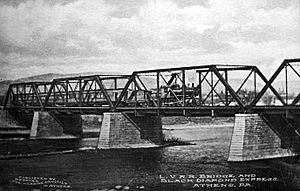 The Black Diamond Express crossing the Susquehanna bridge in Athens, PA, just a few miles to the south, and part of the greater town. 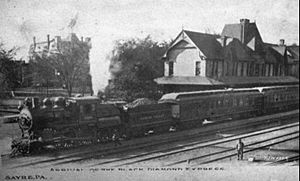 The yard in Sayre & Waverly were main hubs. The full coal bunkers on this express shown stopped suggest the engine was just swapped for a new engine and crew, a faster operation than coaling and watering a tender. Named Express trains did not dawdle for any reason. Like the turn around today of an airliner, dining, beverages, cleaning and other hotel and maintenance services all took place as fast as was possible.

In May 1870, a Waverly banker named Howard Elmer, along with Charles Anthony and James Fritcher, bought the Pine Plains area between Waverly and Athens. Elmer convinced Asa Packer to locate a new railroad repair facility on the Pine Plains for the expanding Lehigh Valley Railroad, which was making a push north from Duryea at the Lackawanna to connect to the Erie Railroad at Waverly to achieve a market share in the much coveted New York City-Great Lakes sweepstakes. Robert Heysham Sayre, president of the Pennsylvania and New York Railroad, helped cement the deal. The town was named in his honor. Sayre was incorporated on January 27, 1891. The town would become famous for its extensive rail yard (still appreciably large today at half the peak size) and more famous for the railroad repair shops and steam locomotive repair and manufacturing shops situated in the town, which employed thousands.

In 1904 when the locomotive shops were built at Sayre, the main shop building was believed to be the largest structure in the world under one roof, but held that title for only a brief time. The railroad founded as a coal rail road in 1855 to connect the Coal Region operated through traffic up the Susquehanna to Elmira and points north and west from 1870 until 1976, but maintenance facilities were shifted away before that with the switch away from anthracite steam locomotives to diesels post-World War II. With the decline of the railway industry, supporting industries and business has also declined along with valley jobs, so the population has declined since 1940, the railroad dependent rust belt towns beginning the process sooner because of dieselization of railroads.

The greater town is located in a river valley in the Allegheny Plateau just north of the confluence of the Susquehanna and Chemung rivers, along with Athens, Pennsylvania, South Waverly, Pennsylvania, and Waverly, New York. Together, these small towns make up the greater area known as the Penn-York Valley, or just "the Valley". The New York / Pennsylvania border cuts through the valley. There is no physical border between the towns, as the grid of streets and avenues blend seamlessly from one town to another.

In earlier times, this territory was a prime location for Native American travel, trade, and warfare because it is strategically situated atop a valley surrounding the confluence of two rivers along the New York state border where the mouth of the Chemung River empties into the Susquehanna River as it turns southward into Pennsylvania. This locale was likely occupied by the Susquehannock people for several centuries before European pathfinders discovered this place. French explorer Étienne Brûlé was probably the first European to visit the area, meeting with the Susquehannocks and travelling down the Susquehanna River in 1615. In the wake of the Beaver Wars of the mid-Seventeenth Century, the area came firmly under the control of the Iroquois, until the Sullivan Expedition during the American Revolutionary War broke their power. The Battle of Newtown (August 29, 1779), the only major battle of that expedition, occurred approximately 13 miles (21 km) west of the current location of Waverly.

John Shepard was one of the more prominent early white settlers, buying 1,000 acres (400 ha), including all of what would become Waverly, and building a mill on the banks of Cayuta Creek in 1796. The settlement would soon become known as Milltown. Originally Milltown was believed to be located in Pennsylvania until it was resurveyed and it was found to be mistakenly 1/4 of a mile north of the border, which moved the settlement into New York State. Soon this burgeoning area came to be known as Factoryville. An adjacent smaller community named Villemont also became established.

At the beginning of the railroad age the community began to thrive. From 1849-51, the New York & Erie Railroad reached the vicinity, opening a rail connection eastward to New York City via Binghamton, and westward to Lake Erie via Elmira. Soon after, in 1854, Waverly became an incorporated village. Waverly become an important railroad junction in 1869 when construction of the Lehigh Valley Railroad from Wilkes-Barre, PA reached northward to this village on the New York State line and increased its viability by effectively linking both railway operations. This also helped spur the economic development of Sayre, Pennsylvania, Waverly's southern neighbor and former home to Lehigh Valley Railroad's locomotive yard and shops. At the height of the railroad age, approximately forty one trains entered the village per day and the population of the village was nearly triple what it is today. During this time, the largest celebration in the village was held: the August, 26th 1910 Old Home Celebration which lasted four hours and packed the streets with spectators.

Several factories of historical significance contributed to a flourishing period in Waverly's development. They included the Hall-Lyons furniture factory which was located on Broad Street and the Manoil Manufacturing Co. whose prominence as a toy company, especially from 1937-1941 when it produced hollow-cast toy soldiers (sometimes called dime store soldiers) along with toy airplanes and cars, was located on Providence Street. Businesses in and around Waverly in the twentieth century included the Spencer Glove Company and the Waverly Sun newspaper, both owned by Hart I. Seely and located in Waverly; the Tioga Mills, Inc., a feed mill company and Agway (Country Foods Division) of Syracuse, New York, as a pet food plant. Others are the Food and Drug Research Laboratories, the State Line Auto Auction and O’Brien’s Inn, known for its scenic view of the Chemung Valley. The J.E. Rodeo Ranch operated during the 1940s and 1950s in Barton.

Waverly is so close to New York State's southern border that the village is part of a much larger community that runs into Bradford County, Pennsylvania. Waverly combines with South Waverly, Sayre and Athens, Pennsylvania to make up the larger community of "The Valley", which just happens to have a state border running through it. Waverly is also a short distance from the border of Chemung County to the west.

Waverly has two local bus services, Ride Tioga and BeST Transit. Ride Tioga is a county-run bus service that stops throughout Waverly and Barton. BeST Transit service makes stops in the Penn-York Valley and Bradford County, Pennsylvania as well as the Lycoming Mall. Shortline Coach USA and Greyhound regional bus services stop in Waverly, as well. The village also has taxi service available through Valley Taxi Service which travels throughout the vicinities of the Penn-York Valley, Elmira Towanda, and Binghamton. Waverly is also conveniently located between the Elmira-Corning Regional Airport in the Town of Big Flats and the Greater Binghamton Airport located in Maine, New York, both of which are medium-sized regional airports serving the Southern Tier of New York.

In 2005, 600 acres (2.4 km2) of wooded, scenic land surrounding the Waverly Reservoir property and encompassing Waverly Glen park, was designated as Two Rivers State Park. Hiking and biking trails may be available, as well as picnic tables, a basketball court, two tennis courts, children's gym equipment, covered pavilions, water taps and barbecue fireplaces. A large pond is on the property and access to the Waverly reservoir. Access to the river is blocked by County Rd. 60 and River Road. The sign at the entrance is gone. Directly south of the park, I86 (Rte 17) briefly enters Pennsylvania before re-entering New York State.

In 2006, the horse racing track at Tioga Downs in neighboring Nichols NY, was expanded to include a Racino with the addition of casino facilities. State funding was secured for this facility, including $1,000,000 for the construction of a waste water treatment plant.

A large portion of the former Snyder Hotel building in downtown Waverly collapsed during a severe weather storm in the summer of 2007, requiring emergency efforts to clear fallen bricks, wood and other building products and restore the safety of downtown operations. Concerns regarding safety remain with some of the historic buildings along Broad Street. Decisions remain as to whether to tear down or renovate these buildings. Waverly sought financial assistance under the state's Restore New York funding program, but was unable to secure any. A tax increase referendum conducted 11 December 2008 resulted in voter approval to secure financing for what has subsequently led to the purchase and relocation of all village municipal services to the former Ithaca Street School, after outgrowing the available space at the historic Waverly Village Hall. On 14 February 2012, the Village of Waverly Trustees accepted a purchase offer for the former Village Hall building by a potential owner, who has agreed to abide by the New York State Historic Preservation Office regulations for its historical preservation.

Waverly was once home to a professional baseball team in 1901, as the Waverly Wagonmakers. The team went under when the New York State League was dissolved in 1917. Waverly is also home to the Waverly Little League, it was founded in 1949. The Waverly School District also has football, baseball, basketball, bowling, golf, tennis, soccer, wrestling, track, and cross country, teams. Waverly's wrestling and track teams achieve consistent state and national rankings. Waverly is also home to many smaller bowling leagues that have matches at the Valley Bowling Center in Waverly. Waverly Memorial Stadium is located in Waverly. Soccer and Football are played at the stadium.

SRAC (Susquehanna River Archeological Center) The archaeological center opened in 2008 dedicated to education, research and preservation of the region's Native American archaeological, cultural and historical assets for the communities within the Twin Tiers Region of Southeastern NY and Northeastern PA. The center holds a gift shop, Lecture hall, and Exhibit hall all located on Broad Street, downtown.

All content from Kiddle encyclopedia articles (including the article images and facts) can be freely used under Attribution-ShareAlike license, unless stated otherwise. Cite this article:
Waverly, Tioga County, New York Facts for Kids. Kiddle Encyclopedia.