Sayre is a borough in Bradford County, Pennsylvania. The largest in the county, it is the principal city in the Sayre, PA Micropolitan Statistical Area. It lies 18 miles southeast of Elmira, New York, and 30 miles southwest of Binghamton, New York. In the past, various iron products were made there. In 1900, 5,243 people lived there; in 1910, 6,426 people lived there, and in 1940, 7,569 persons made their homes in Sayre. The population was 5,587 at the 2010 census.

Sayre is part of the Penn-York Valley ("The Valley"), a group of four contiguous communities in New York and Pennsylvania: Waverly, New York; South Waverly, Pennsylvania; Sayre; Athens, Pennsylvania, and smaller surrounding communities with a combined population near 35,000.

In May 1870, a Waverly banker named Howard Elmer, along with Charles Anthony and James Fritcher, bought the Pine Plains area between Waverly and Athens. Elmer convinced Asa Packer to locate a new railroad repair facility on the Pine Plains for the expanding Lehigh Valley Railroad, which was making a push north to connect to the Erie Railroad at Waverly. Robert Heysham Sayre, president of the Pennsylvania and New York Railroad, helped cement the deal. The town was named in his honor. Sayre was incorporated on January 27, 1891.

In 1904 when the locomotive shops were built at Sayre, the main shop building was believed to be the largest structure in the world under one roof, but held that title for only a brief time. The railroad operated from 1870 until 1976, but maintenance facilities were shifted away before that. With the decline of industry, population has declined since 1940.

Sayre is located at 41°59′1″N 76°31′15″W﻿ / ﻿41.98361°N 76.52083°W﻿ / 41.98361; -76.52083 (41.983567, -76.520845) in a river valley in the Allegheny Plateau just north of the confluence of the Susquehanna River and the Chemung River, along with Athens, Pennsylvania, South Waverly, Pennsylvania, and Waverly, New York. Together, these small towns make up the greater area known as the Penn-York Valley, or just "the Valley". The New York / Pennsylvania border cuts through the valley. There is no physical border between the towns, as the grid of streets and avenues blend seamlessly from one town to another. Sayre is bounded on the east and west by Athens Township, on the south by the borough of Athens, on the northwest by South Waverly, and on the north by Waverly, New York.

Pennsylvania Route 199 passes through the borough as Keystone Avenue, Mohawk Street, and Spring Street, ending at Interstate 86 just over the state line in Waverly, New York. Via I-86 it is 17 miles (27 km) northwest to Elmira, New York, and by New York State Route 17 (future I-86) it is 38 miles (61 km) east to Binghamton, New York. 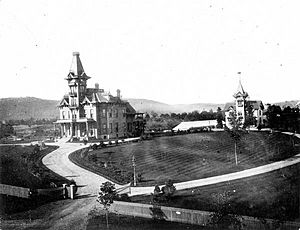 Robert Packer Hospital was named after Robert Asa Packer, who came to Sayre when the town became the point of distribution for the Lehigh Valley Railroad's northern traffic. Shortly after his arrival, Packer invested in the Sayre Land Company and purchased 20 acres between Lockhart and Hayden Streets and between Wilbur Avenue and Hayden's Pond.

Sayre is home to the Robert Packer Hospital and Guthrie Clinic.

The "horned giants" of Sayre is an urban legend concerning a series of skeletons that included a horned skull reportedly discovered during the 1880s by the then-state historian, Dr. G.P. Donehoo, and two visiting professors, A.B. Skinner and W.K. Moorehead while excavating a burial mound. The skeletons were reported to be at or above 7 feet (2.1 m) in height, possessing skulls that had horn-like protuberances just above the eyebrows, but were claimed to have been lost, misplaced, or stolen while in route to the American Investigation Museum. Neither Donehoo, Skinner, nor Moorehead described the discovery of any human skeletons at Sayre exhibiting gigantism or horned protrusions in their official excavation reports

Children residing in the borough are assigned to attend the Sayre Area School District.

All content from Kiddle encyclopedia articles (including the article images and facts) can be freely used under Attribution-ShareAlike license, unless stated otherwise. Cite this article:
Sayre, Pennsylvania Facts for Kids. Kiddle Encyclopedia.