Kids Encyclopedia Facts
(Redirected from Corning, New York)
This page is about the city. For the adjacent town, see Corning (town), New York.

Corning is a city in Steuben County, New York, United States, on the Chemung River. The population was 11,183 at the 2010 census. It is named for Erastus Corning, an Albany financier and railroad executive who was an investor in the company that developed the community. 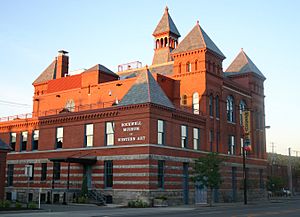 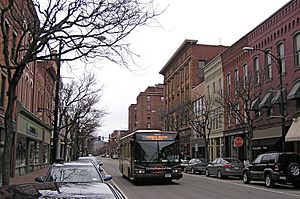 The city of Corning is at the western edge of the town of Corning and in the southeast part of Steuben County.

The city is the headquarters of Fortune 500 company Corning Incorporated, formerly Corning Glass Works, a manufacturer of glass and ceramic products for industrial, scientific and technical uses.

The city's other major cultural attraction is the Rockwell Museum. It contains an important collection of Western American painting and sculpture assembled over the past 40 years by Robert F. and Hertha Rockwell. The city has been cited several times by American Style magazine as one of the top twenty-five small city arts destinations in the U.S. – most recently in June 2010. Many of the cultural events and historic landmarks in the city are in Corning's Gaffer District.

Corning Country Club annually hosted the Corning Classic, a stop on the Ladies Professional Golf Association tour, from 1979 to 2009. The city has commercial air service available at Elmira/Corning Regional Airport in the nearby town of Big Flats.

It is also home to the 2006 New York State Class A Football Champions.

In 2003, Charles R. Mitchell and Kirk W. House produced Corning, a historic photo book in Arcadia Publishing's "Images of America" series. Photos were drawn from the archives of the Corning-Painted Post Historical Society.

In 2013, Rand McNally's list of best small towns in America named Corning the "Most Fun" town out of all the list's finalists.

In 2008, the City of Corning banned public water fluoridation. In 2006, the city council approved public water fluoridation. In 2007, a petition had been launched by local resident Kirk Huttleston which became known as Proposition 1. Proposition 1 passed the ban by a close vote of 1,287 to 1,222 according to unofficial results.

The first settlement in the town of Corning was made near the site of the future city in 1796. The community was set apart from the town as a village in 1848. Corning was incorporated as a city in 1890. As the glass industry developed, Corning became known as the "Crystal City" which was supported by companies such as Hawkes, Sinclair, and Hunt - which produced some of the finest American Brilliant Period cut glass between 1880-1915.

The Corning area's first real industry was lumber. The first settlers used the area's river systems to transport logs and finished lumber in fleets downstream to buyers. This gave rise to large mills which helped to develop the area. Rafting of lumber began to wane as timber was depleted. At one time the mills of the Corning area were reputed to be among the biggest in the world. After the lumber was depleted the great mills moved north to new forests.

East, across the Chemung River from Corning, lies Gibson, the site of a feeder canal for the Chemung Canal system. Some of Corning's early prosperity came from the feeder canal system exposure. Canal cargoes from Corning included soft coal, timber, tobacco, grain, and whiskey. From April 22 to December 11, 1850, the canal season that year, the newspaper reported that 1,116 boats left the port of Corning. Tolls for the year totaled $54,060.39. Among items shipped were 46,572,400 pounds of coal. The canal's best peacetime year was 1854 when 270,978 tons of freight was hauled. The Civil War brought an abnormal amount of business, with a peak of 307,151 tons hauled in one year.

After the Civil War, an industrial boom occurred in the region. Ingersoll Rand opened during this period in Painted Post, just north of Corning. 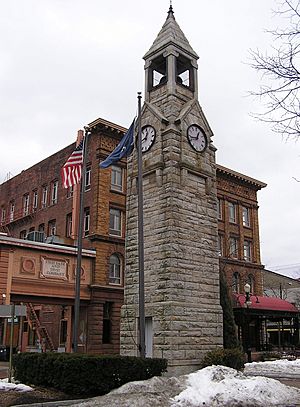 Just upstream from Corning, the Cohocton River and the Tioga River merge to form the Chemung River which flows through downtown. The river was an important source of power in the early history, and is part of the attractiveness of the region today. The river is prone to floods, as rain water runs off quickly from the steep hillsides of the area, the worst recent flood being in 1972, as the remnants of Hurricane Agnes dropped fifteen or more inches of rain in the area within a short time. Eighteen people were killed in the immediate Corning-Painted Post area. The entire downtown area was flooded, with severe damage. Downtown has been refurbished and has become somewhat gentrified.

Flooding is now controlled by a system of dams upstream from Corning.

The flood of 1972 was a major event for the area. On June 22, 1972, the storm that had been Hurricane Agnes struck the Southern Tier of New York. The storm combined with a storm system from Ohio to drop six to eight inches (203 mm) of rain in the Chemung River basin. This ultimately overwhelmed the flood control systems of the time, and the Chemung River broke through the dam system on Friday, June 23 at 4:00 a.m. By 9:00 a.m. the river crested and began to recede. In the Corning area, eighteen people were killed and untold millions of dollars of damage was incurred. An example of these expenses took place in the town of Bath, NY, where a local woman, Lila Marano cooked nearly 100 pizzas out of her home kitchen to accommodate students at the Haverling High School graduation reception. The river receded within hours, leaving mud which can still be found in basements of homes and businesses in Corning, and there is a section of the Corning Museum of Glass that indicates on the wall how high the flood waters rose.

Market Street is an area that consists of many restaurants and shops. Many of the buildings are brick due to the fire that devastated the area. It is a historical part of The City Of Corning.

All content from Kiddle encyclopedia articles (including the article images and facts) can be freely used under Attribution-ShareAlike license, unless stated otherwise. Cite this article:
Corning (city), New York Facts for Kids. Kiddle Encyclopedia.