Horseheads is a village in Chemung County, New York, United States. The population was 6,461 at the 2010 census. The name is derived from the number of bleached skulls of pack horses left behind by the Sullivan Expedition.

The village of Horseheads is located within the town of Horseheads. It is north of the city of Elmira and is part of the Elmira Metropolitan Statistical Area.

In September 1779, forces under General John Sullivan marched north 450 miles (720 km) from Easton, Pennsylvania, over to Wyoming, Pennsylvania, and on up the Susquehanna River to Newtown (Elmira), then continued north through what is now known as Horseheads to the Finger Lakes region and west to Genesee, on a mission against Loyalists and their Iroquois allies. They returned about three weeks later, largely on the same route.

The journey had been particularly severe and wearing upon the animals, and their food supply was found insufficient. Arriving about 6 miles (10 km) north of Fort Reid on September 24, 1779, they were obliged to dispose of a large number of sick and disabled horses. The number of horses was so great that they were quite noticeable, and the native Iroquois collected the skulls and arranged them in a line along the trail. From that time forward, that spot was referred to as the "valley of the horses' heads" and is still known by the name given to it by the Iroquois.

The settlement of the village area began around 1830. The village was officially incorporated in 1839 as the "Village of Fairport," due to its location on the Chemung Canal, but changed its name back to "Horseheads" in 1945. In 1885, it was renamed "North Elmira" but the village resumed the original name, "Horseheads" in 1886.

The village was once a port on the Chemung Canal.

Horseheads village is in the Southern Tier Region of New York, 5 miles (8 km) north of downtown Elmira. It is located at a low point on the Eastern Continental Divide separating the Susquehanna River watershed to the south and the Lake Ontario watershed to the north. Newtown Creek on the east side of the village flows south toward the Chemung River, a tributary of the Susquehanna, while the northernmost part of the village drains north to Catharine Creek, the main tributary of Seneca Lake, one of the Finger Lakes. 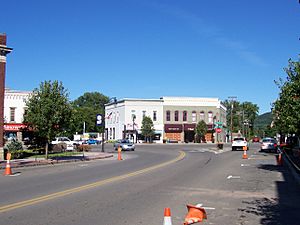 All content from Kiddle encyclopedia articles (including the article images and facts) can be freely used under Attribution-ShareAlike license, unless stated otherwise. Cite this article:
Horseheads (village), New York Facts for Kids. Kiddle Encyclopedia.