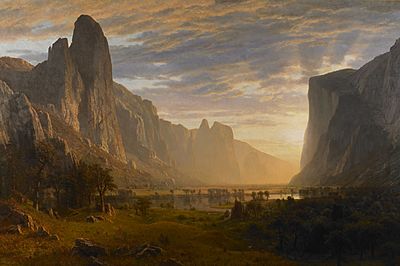 Founded in 1951, the Birmingham Museum of Art in Birmingham, Alabama, today has one of the finest collections in the Southeastern United States, with more than 24,000 paintings, sculptures, prints, drawings, and decorative arts representing a numerous diverse cultures, including Asian, European, American, African, Pre-Columbian, and Native American. Among other highlights, the Museum’s collection of Asian art is considered the finest and most comprehensive in the Southeast, and its Vietnamese ceramics one of the finest in the U.S. The Museum also is home to a remarkable Kress Collection of Renaissance and Baroque paintings, sculpture, and decorative arts from the late 13th century to c.1750, and the 18th-century European decorative arts include superior examples of English ceramics and French furniture.

The Birmingham Museum of Art is owned by the City of Birmingham and encompasses 3.9 acres (16,000 m2) in the heart of the city’s cultural district. Erected in 1959, the present building was designed by architects Warren, Knight and Davis, and a major renovation and expansion by Edward Larrabee Barnes of New York was completed in 1993. The facility encompasses 180,000 square feet (17,000 m2), including an outdoor sculpture garden. 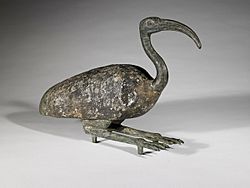 A Late Period sculpture of an ibis from Ancient Egypt's Twenty-sixth Dynasty, 664–332 BC. 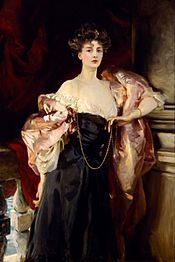 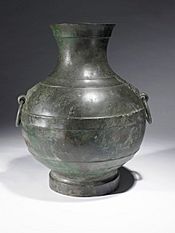 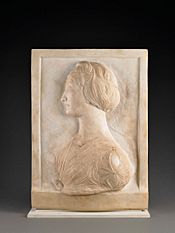 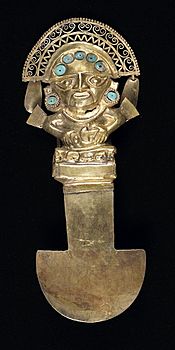 A ceremonial knife (tumi) from the Sican culture of Peru, dating between 900–1100 AD.

The Museum’s growing collection of nearly 2,000 objects is derived from the major culture groups of sub-Saharan Africa and dates from the 12th century to the present. The collection features fine examples of figure sculpture, masks, ritual objects, furniture and household and utilitarian objects, textiles, ceramics and metal arts, with an Egyptian false door, Yoruba mask, Benin bronze hip pendant, and a divination portrait of a king from Dahomey.

Spanning the late 18th through mid-20th century, the Museum’s collection of American painting, sculpture, works on paper, and decorative arts features paintings by Gilbert Stuart, Childe Hassam, and Georgia O'Keeffe; sculptures by Hiram Powers and Frederic Remington; and important decorative pieces by Tiffany Studios and Frank Lloyd Wright. Considered one of the three most important American landscape paintings, the Museum’s Looking Down Yosemite Valley, California (1865) by Bierstadt was recently chosen by The National Endowment for the Humanities as one of 40 American masterpieces that best depict the people, places, and events that have shaped our country and tell America’s story.

Since its doors opened to the public in 1951, the Birmingham Museum of Art has collected and exhibited the art of Alabama. Among the earliest works to enter the collection were paintings by significant Alabama artists including the miniaturist Hannah Elliott and the landscapist Carrie Hill. Throughout its history, the Museum has continued its commitment to the arts of Alabama. In 1995, it organized Made in Alabama, a groundbreaking survey of artistic production in the state during the 19th century. In addition to collecting the works of academically trained native artists, the Museum has built an impressive collection of folk art, including painting, sculpture, quilts, and pottery. Thanks to the generosity of Robert and Helen Cargo, the Museum possesses one of the largest and most comprehensive collections of Southern quilts in the country. Similarly, several major private collectors are helping the Museum build the most significant repository of Alabama pottery in the State.

The Museum’s Asian art collection started with a gift of Chinese textiles in 1951 and today, with more than 4,000 objects, is the largest and most comprehensive in the Southeast. The collection hails from China, Korea, Japan, India, and Southeast Asia, featuring the finest collection of Vietnamese ceramics in the U.S., as well as outstanding examples of Buddhist and Hindu art, lacquer ware, ceramics, paintings, prints, and sculpture. Highlights include a rare Ming dynasty temple wall and Tang dynasty tomb figures from China; Jomon period pottery from Japan; and contemporary works such as The Grand Residence, considered by Chinese painter Wu Guanzhong among his most important works. Also, on long-term loan from The Smithsonian Institution is the Vetlesen Jade Collection of 16th- to 19th-century pieces, one of the most important jade collections in the U.S. The Museum has the only gallery for Korean art in the Southeast.

Since 2009 a permanent display of Folk art will feature works by Bill Traylor, Thornton Dial, Alabama’s outstanding quilters, and other self-taught artists.

One of the foundations of the Museum’s permanent collection, the European decorative arts comprise more than 12,000 objects including ceramics, glass, and furniture dating from the Renaissance to present day. Notable holdings include the only public collection of late 19th-century European cast iron items in the U.S. and the Eugenia Woodward Hitt Collection of 18th-century French art, including furniture of the Louis XIV, XV, and XVI periods, mounted porcelain, gilt bronzes, paintings, and works on paper from the Regénce to the period following the French Revolution. The Dwight and Lucille Beeson Wedgwood Collection is the finest outside England, comprising more than 1,400 objects illustrating the entire production of the Wedgwood factory from its early years through the 19th century.

The museum features a large installation of Native American arts. The galleries are organized into four cultural groupings according to region: Eastern Woodlands, Plains, Northwest Coast, and Southwest. Highlights of the collection include a large grouping of fine Navajo blankets and rugs, an extensive collection of Northwest coast art, and important historic and contemporary Pueblo ceramics. There also are excellent examples of Plains beadwork and stunning shaman headdresses.

One of the most distinctive spaces for the display of outdoor art in the southeastern United States, this beautiful multi-level sculpture garden features works by artists such as Fernando Botero, Jacques Lipchitz and Auguste Rodin as well as three site-specific artworks commissioned by the Museum: Lithos II (1993) by Elyn Zimmerman, a water wall and pool of textured granite blocks set into the curving east wall of the garden, Blue Pools Courtyard (1993) by artist Valerie Jaudon, featuring inlaid tile pools, plantings, and brick and bluestone pavers and Sol LeWitt’s Bands of Color in Various Directions, commissioned in 2001 in celebration of the Museum’s 50th anniversary.

The Clarence B. Hanson Jr. Library

Named for Clarence Bloodworth Hanson Jr., former publisher of The Birmingham News and a Birmingham Museum of Art board member for 24 years, the Museum’s library is one of the most comprehensive art research libraries in the southeastern U.S. Holdings include a broad range of materials including general art reference works, auction catalogues, artists’ files, periodicals, indexes, exhibition catalogs, and databases. The Chellis Wedgwood Library, the largest and most comprehensive special collection in the world related to Josiah Wedgwood and his manufactures, along with the Beeson rare book holdings, make this the U.S. center for the study of Wedgwood. Among these holdings are letters from John Flaxman and Benjamin West, and Sir William Hamilton’s Collection of Engravings from Antique Vases, known as the Hamilton Folios, the first European color-plate books.

The roots of the museum date back to 1908 and the founding of the "Birmingham Art Club" which endeavored to amass a public art collection for the benefit of the citizens of Birmingham, which had been founded as a new industrial city only 37 years prior. In 1927 they were able to display their collection in the galleries of the new Birmingham Public Library. Over the next two decades the club continued to add to the collection and raise support in the press and in City Hall for the concept of a new building.

In September 1950 a governing board was created to oversee the creation of a museum as "an institution of public service, educational and recreational, with all the people welcome." The following February the board hired Richard Foster Howard to serve as the first museum director. In April 1951 the newly established "Birmingham Museum of Art" presented a public "Opening Exhibition" housed in five unused rooms in City Hall. The exhibition included some pieces from the existing Art Club collection as well as a large number of loaned works from museums across the Eastern half of the United States. The result was considered to be "the finest showing of great objects of art in the South to date." 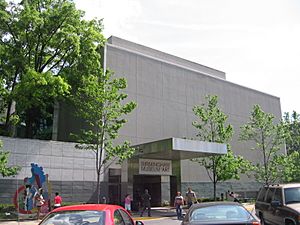 North public entrance off the west wing of the Birmingham Museum of Art.

The publicity created by the exhibition led to several important gifts, notably of Chinese ceramics and textiles, Japanese prints, Old master prints, costumes, glass, and oil paintings. In 1952 the Samuel H. Kress Foundation presented 29 paintings from the Italian Renaissance as a long-term loan to the new museum, forming the core of the collection of European paintings. A large bequest in 1954 made possible a new museum building. Land was purchased the following year and a design commission for a new museum building was given to the office of Warren Knight & Davis. The "Oscar Wells Memorial Building" opened to the public on May 3, 1959. In the following years the Kress Foundation made two important gifts to the museum: the trusteeship of a collection of Renaissance furniture and decorative objects in 1959, and the deed to the Italian paintings already on loan, along with eight additional works from the same period. The following year, the American Cast Iron Pipe Company loaned its Lamprecht Collection of German cast-iron objects (the largest in the world).

A level of upper floor galleries was added to the building's west wing in 1965. In 1967 a new east wing was completed. Additional land was purchased in 1969, and in 1974 another addition included a three-story rebuilding of the east wing. Further reworking of the east wing added a conservation lab, loading dock, and a second public entrance to the building in 1979, and the following year, gallery space was expanded by 28,000 square feet (2,600 m²). In 1986 another expansion project was planned and architect Edward Larrabee Barnes, in conjunction with local architect KPS Group, Inc., was selected to oversee the design, which included provision for a new outdoor sculpture garden and 50,000 square feet (5,000 m²) of exhibition space bringing the total to 180,000 square feet (15,400 m²).

All content from Kiddle encyclopedia articles (including the article images and facts) can be freely used under Attribution-ShareAlike license, unless stated otherwise. Cite this article:
Birmingham Museum of Art Facts for Kids. Kiddle Encyclopedia.