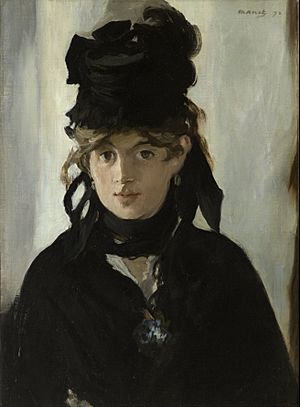 In the 1860s, she studied with Camille Corot. She exhibited at the 1865 Salon. Morisot met artist Édouard Manet in 1868. Manet painted her portrait several times. The two had great influence on one another's work. In 1874, she married his brother, Eugène.

She exhibited at the first Impressionist exhibition in 1874. Morisot worked in oils, pastels, and watercolor. Her pictures are light and delicate. They typically depict women and children in everyday domestic life.

All content from Kiddle encyclopedia articles (including the article images and facts) can be freely used under Attribution-ShareAlike license, unless stated otherwise. Cite this article:
Berthe Morisot Facts for Kids. Kiddle Encyclopedia.