Founded in 1941, it is home to both permanent and special collections, the former of which includes Asian, American, and European art that spans 4,000 years from ancient to modern. 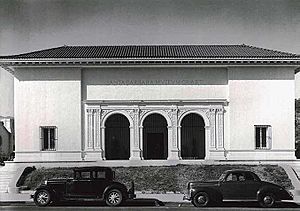 The Santa Barbara Museum of Art opened to the public on June 5, 1941, in a building that was at one time the Santa Barbara Post Office (1914–1932). The idea for an art museum first came from the local artist Colin Campbell Cooper when he learned that the post office was going to be sold. In a letter to the editor published in the Santa Barbara News-Press in July 1937, Cooper proposed that the impressive Italianate structure should be transformed into a museum. After gaining momentum in town and with the support of local businesses, politicians and art collectors the Santa Barbara Museum of Art was officially established just four years after Cooper's letter was published. The renowned Chicago architect David Adler was hired to simplify the building's façade and create the Museum's first galleries including: Ludington Court, Thayer Gallery, von Romberg Gallery, Campbell Gallery and Gould Gallery. One of the Museum's key founders, Wright S. Ludington, was instrumental in its formation and was active with the Museum for over 50 years even serving as its president in the early 1950s. Most importantly, however, Ludington donated nearly 400 objects to the Museum's permanent collection including Ancient Greek and Roman antiquities, Ancient Chinese sculptures, as well as work from modern artists including Henri Matisse, Edgar Degas, Joseph Stella, Georges Braque, Pablo Picasso and Joan Miro.

Over its history the Museum has expanded with the addition of the Stanley B. McCormick Gallery donated by his wife Katharine McCormick in 1942 and the Sterling and Preston Morton Galleries in 1963. Significant expansions came when the Alice Keck Park Wing opened to the public in 1985 and the Jean and Austin H. Peck, Jr. Wing in 1998. The Ridley-Tree Education Center at McCormick House, a center for art education activities, was established in 1991. The newly renovated Park Wing Entrance and Luria Activities Center opened in June 2006. Beginning in Summer 2016, the SBMA embarked on the largest renovation in its history addressing critical needs of the building including: seismic retrofitting, new storage and conservation space, new roof and mechanical systems, new art receiving facility and an increase in overall gallery space.

SBMA's permanent collection includes more than 27,000 works of art, including paintings, sculpture, prints, drawings, photographs, ceramics, glass, jades, bronzes, lacquer and textiles. These works represent the arts of Asia, Europe and the Americas spanning over 5,000 years of human history. Particular strengths of the permanent collection include:

SBMA presents shows of art and artists of the past, such as Degas, Leonardo, Picasso, Rothko, and Van Gogh, and of artists of recent years.

All content from Kiddle encyclopedia articles (including the article images and facts) can be freely used under Attribution-ShareAlike license, unless stated otherwise. Cite this article:
Santa Barbara Museum of Art Facts for Kids. Kiddle Encyclopedia.