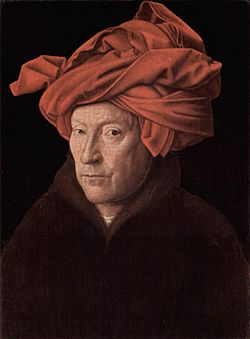 Portrait of a Man in a Turban, it may have been a self-portrait, painted in 1433

Jan van Eyck or Johannes de Eyck (before c. 1395 – before July 9, 1441) was an Early Netherlandish painter active in Bruges and considered one of the best Northern European painters of the 15th century.

There is a common misconception, which dates back to the sixteenth-century, that Jan van Eyck invented oil painting. It is however true that he achieved, or perfected, new and remarkable effects using this technique. Thus, due to his early mastery of the technique, he has often been referred to as the "father of oil painting." He was interested in art since he was a child and was encouraged in this career by his older brother, Hubert.

Jan van Eyck died in Bruges in 1441 and was buried there in the Church of St Donatian (destroyed during the French Revolution).

All content from Kiddle encyclopedia articles (including the article images and facts) can be freely used under Attribution-ShareAlike license, unless stated otherwise. Cite this article:
Jan van Eyck Facts for Kids. Kiddle Encyclopedia.