According to the teaching of the Roman Catholic Church, Purgatory is the "final purification of the elect": "All who die in God's grace and friendship, but still imperfectly purified, are indeed assured of their eternal salvation; but after death they undergo purification, so as to achieve the holiness necessary to enter the joy of heaven."

“In Purgatory there are different levels; the lowest is close to hell and the highest gradually draws near to Heaven. It is not All Souls Day, but, Christmas, that the greatest number of souls leave Purgatory.

There are in Purgatory, souls who pray ardently to God, but for whom no relative or friend prays on earth. God makes them benefit from the prayers of other people.

It happens that God permits them to manifest themselves in different way, close to their relatives on earth, in order to remind men of the existence of Purgatory and to solicit their prayers to come close to God who is just, but good.

Purgatory in art and culture 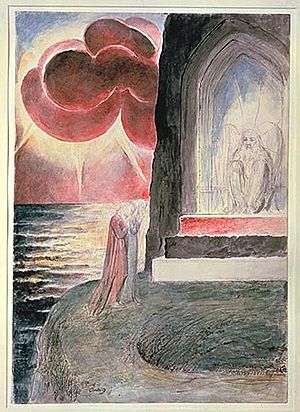 Perhaps the best-known instance of purgatory in the arts is Dante's Purgatorio, the second book of his Divine Comedy. Likewise, the Ghost in William Shakespeare's Hamlet may also presuppose a belief in purgatory,

All content from Kiddle encyclopedia articles (including the article images and facts) can be freely used under Attribution-ShareAlike license, unless stated otherwise. Cite this article:
Purgatory Facts for Kids. Kiddle Encyclopedia.