Magdalena Carmen Frida Kahlo y Calderón (July 6, 1907 – July 13, 1954), usually known as Frida Kahlo, was a Mexican painter. She was known for her surreal and very personal works. She was married to Diego Rivera, who was also a well-known painter. 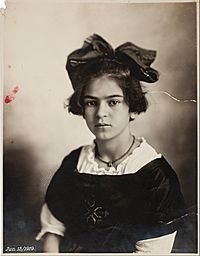 Frida Kahlo as a child

Frida was born in Coyoacán, Mexico. She had polio that left her disabled when she was 6 years old, and some people think that she may have had spina bifida (a birth defect that affects the development of part of the spine) as well.

She studied medicine and planned to become a doctor.

When Frida was 18, she was in a traffic accident that badly injured her. She had periods of severe pain for the rest of her life. After this accident, Kahlo stopped her medical studies and took up painting. She used ideas about things that had happened to her. Frida had strong feelings about not being able to have children, and her feelings were reflected in her paintings. They are often shocking in the way they show pain and the harsh lives of women.

Fifty-five of her 143 paintings are of herself (self-portraits). She was also influenced by native Mexican culture. Her paintings were usually made of bright colors, with a mixture of realism and symbolism. Frida's paintings attracted the attention of the artist Diego Rivera, whom she later married.

Kahlo's work is sometimes called "surrealist." She did not want that label to describe her, but she did organize art shows several times with European surrealists. She was known for centering her paintings around women, which made her popular among women in the last decades of the 20th century. Some of her work is seen at the Frida Kahlo Museum, found in her birthplace and home in suburban Mexico City.

Frida Kahlo was a communist. She died of a pulmonary embolism in Coyoacán.

All content from Kiddle encyclopedia articles (including the article images and facts) can be freely used under Attribution-ShareAlike license, unless stated otherwise. Cite this article:
Frida Kahlo Facts for Kids. Kiddle Encyclopedia.