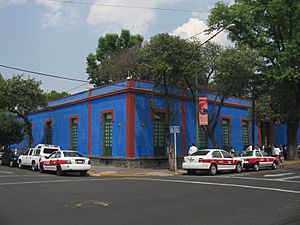 Facade of the house

The Frida Kahlo Museum (Spanish: Museo Frida Kahlo), also known as the Blue House (La Casa Azul) for the structure's cobalt-blue walls, is a historic house museum and art museum dedicated to the life and work of Mexican artist Frida Kahlo. It is located in the Colonia del Carmen neighborhood of Coyoacán in Mexico City. The building was Kahlo's birthplace, the home where she grew up, lived with her husband Diego Rivera for a number of years, and where she later died in a room on the upper floor. In 1957, Diego Rivera donated the home and its contents in order to turn it into a museum in Frida's honor.

The museum contains a collection of artwork by Frida Kahlo, Diego Rivera, and other artists along with the couple's Mexican folk art, pre-Hispanic artifacts, photographs, memorabilia, personal items, and more. The collection is displayed in the rooms of the house which remains much as it was in the 1950s. It is the most popular museum in Coyoacán and one of the most visited in Mexico City.

All content from Kiddle encyclopedia articles (including the article images and facts) can be freely used under Attribution-ShareAlike license, unless stated otherwise. Cite this article:
Frida Kahlo Museum Facts for Kids. Kiddle Encyclopedia.