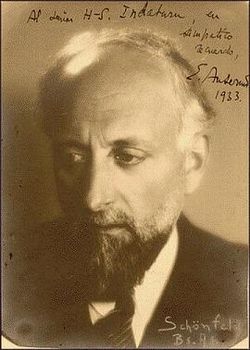 Ansermet was born in Vevey, Switzerland. He started his career as a professor of mathematics at the University of Lausanne. He soon became more interested in conducting. He spent a year in Berlin to learn something from Arthur Nikisch and Felix Weingartner. In 1912 he began conducting at the Casino in Montreux. From 1915 to 1923 was the conductor for Diaghilev's Ballets Russes. He travelled with them to France where he met Debussy and Ravel. He talked to them about how they wanted their works to be played. During World War I, he met Stravinsky, who was exiled in Switzerland. This made him very interested in Russian music.

In 1918, Ansermet started an orchestra of his own, the Orchestre de la Suisse Romande (OSR). He remained conductor of this orchestra until he retired in 1966. He made this into an internationally famous orchestra. They travelled to many countries in Europe and America. They gave first performances of many modern works. After World War II they made many recordings for Decca Records.

Ansermet was largely self-taught. His conducting was very different from that of many of the other famous conductors of the time such as Pierre Monteux, Wilhelm Furtwängler and Otto Klemperer. He did not like the way that Stravinsky kept making changes to his works. He conducted works by Arthur Honegger and Frank Martin, but did not like serial music such as that of Arnold Schoenberg.

All content from Kiddle encyclopedia articles (including the article images and facts) can be freely used under Attribution-ShareAlike license, unless stated otherwise. Cite this article:
Ernest Ansermet Facts for Kids. Kiddle Encyclopedia.