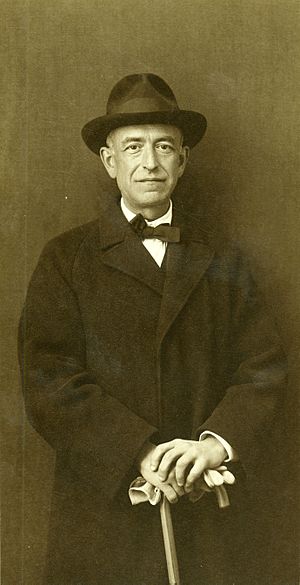 Manuel de Falla (born Cádiz, Spain, 23 November 1876; died Alta Gracia, Argentina, 14 November 1946) was a Spanish composer. Falla (pronounce: “FA-ya”), together with Albéniz and Granados, helped to make Spanish music important again after three centuries during which there had been no important Spanish composers.

Falla had his first music lessons in Cádiz. At first he did not know whether he wanted to take music or literature as a career. When he was ten he started to go to music evenings where he heard chamber music being played. Then he started to go to the opera, and he heard church music and orchestral music. He liked the music of Grieg and decided that he wanted to do something similar with Spanish music. He went to Madrid where he studied very hard and won prizes. His first compositions were played in Cádiz. He studied with Pedrell who had also taught Albéniz and Granados.

He wrote a song called Tus ojillos negros which became very popular, and he won a prize for a piano composition, but it was his opera La vida breve (1904-1905) which really showed his genius, although it was not performed at the time. No one in Spain wanted to perform his zarzuelas, so he went to Paris in 1907. He soon made friends with Dukas, Debussy and Ravel. He made changes to La vida breve and it was performed in Paris in 1913. His piano works and songs were also performed in Paris, and in Madrid.

In 1915 he wrote El amor brujo. It was a work with dances, songs and spoken passages. He soon turned it into a ballet. The music uses the songs of Andalusia and the rhythms of Spanish folkmusic. He wrote a work for solo piano and orchestra called Noches en los jardines de España (Nights in the gardens of Spain). Later he changed it to a ballet for Diaghilev, calling it El sombrero. It was performed in London in 1919 with designs by Picasso. The music is very lively and often sounds like a guitar. He wrote a piano piece called Fantasia bética (1919) which is the most important Spanish piano work after Albéniz’s Iberia.

Falla had many friends, including Lorca. They liked small theatre pieces and Falla wrote El retablo and set it as a puppet opera. He liked the music of the past centuries, and wrote a concerto for harpsichord and five other instruments.

During his final years Falla was composing a very large work called Atlántida. It was a long oratorio for soloists, chorus and orchestra. The words were in Catalan. Falla did not live long enough to finish the work. He became very depressed because of World War II. In the end he was invited to Argentina where he settled. He continued to work at Atlántida, but he had not finished it when he died. A man called Ernesto Halffter spent many years trying to finish it and prepare it for a performance. It was performed on stage at La Scala, Milan, in 1962, but it does not work well as an opera. Occasionally it is performed as a concert piece.

All content from Kiddle encyclopedia articles (including the article images and facts) can be freely used under Attribution-ShareAlike license, unless stated otherwise. Cite this article:
Manuel de Falla Facts for Kids. Kiddle Encyclopedia.