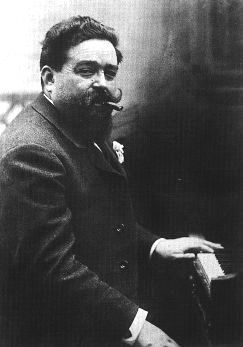 Isaac Albéniz (pronounced EE-saac al-BAY-nith) (born Camprodón, Catalonia, Spain, 29 May 1860; died Cambô-les-Bains, Spain, 18 May 1909) was a Spanish composer and pianist. He wrote a lot of piano music. His best known work is the collection of 12 piano pieces called Iberia which have lots of exciting Spanish rhythms. These pieces are very difficult to play. He also wrote several zarzuelas (light-hearted Spanish operas) and he tried to make the zarzuela more serious, but the public did not want that. He helped to make Spanish music more popular in other countries.

Albéniz started to learn the piano when he was three. His elder sister taught him. He was a child prodigy who first performed at the age of four. When he was seven he passed the entrance examination for piano at the Paris Conservatoire, but he was not given a place because they thought he was too young. A year later his father lost his job, so he took his two children on tour so that they could give concerts and earn some money. In 1869 the family moved to Madrid, but Albéniz had an unsettled childhood. He twice ran away from home, giving concerts in various places and even escaping as a stowaway to South America where he visited Argentina, Uruguay, Brazil, Cuba, Puerto Rico and then the USA. He returned to Spain in 1873. By the age of fifteen, he had already given concerts all over the world. After a short stay at the Leipzig Conservatory, in 1876 he went to study in Brussels. In 1880, he went to Budapest wanting to study with Franz Liszt, but Liszt was not there.

Albéniz continued to travel all over the world. In 1883, he met the teacher and composer Felipe Pedrell, who inspired him to write Spanish music such as the Suite Española, Op. 47. The fifth movement of that suite, called Asturias (Leyenda), was later arranged for guitar. It is probably the most famous piece for classical guitar. The composer Francisco Tárrega made guitar arrangements of many other piano works by Albéniz. Albéniz once said that he preferred Tárrega’s guitar arrangements to his own original piano versions.

During the 1890s Albéniz lived in London and Paris and wrote mainly theatrical works. In 1900 he started to suffer from Bright's disease and started to write more piano music. Between 1905 and 1909 he composed his most famous work, Iberia (1908), a suite of twelve piano "impressions".

His orchestral works include Spanish Rhapsody (1887) and Catalonia (1899).

In 1883, the composer married his student Rosina Jordana. They had three children, Blanca (who died in 1886), Laura (a painter), and Alfonso (who played for Real Madrid in the early 1900s before becoming a diplomat).

Although he became world famous as a composer and pianist he was not properly appreciated in his own country. The Spaniards were jealous of his international reputation and thought he was a Spaniard who had deserted his country. He spent his last years in Paris where he had many friends including Gabriel Fauré, Vincent d’Indy, Paul Dukas and Claude Debussy.

There are no recordings of his piano playing but he had a very individual style. He was able to put a lot of colour and life into his playing. He had learned a lot from Liszt.

Most of his works are for piano. The Suite Iberia is his best work. A lot of the music is based on Spanish folksong.

All content from Kiddle encyclopedia articles (including the article images and facts) can be freely used under Attribution-ShareAlike license, unless stated otherwise. Cite this article:
Isaac Albéniz Facts for Kids. Kiddle Encyclopedia.