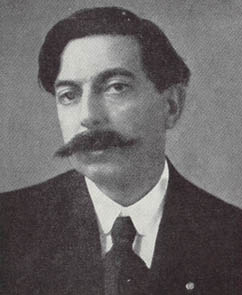 Enrique Granados (born Lérida, Spain, 27 July 1867; died in the English Channel, 24 March 1916) was a Spanish composer and pianist. He lived most of his life in Barcelona. His favourite painter was Goya and his best work, the piano pieces called Goyescas, are inspired by Goya’s paintings.

Granados started having piano lessons in Barcelona and then went to Paris where he studied privately with Charles de Bériot. He returned to Barcelona in 1889 and the following year gave his first piano recital. He wrote a zarzuela (light opera) called Maria del Carmen. The king liked it very much and gave him an award.

During the following years he composed a lot and performed with famous musicians such as Jacques Thibaud, Pau Casals and Camille Saint-Saëns. His piano suite Goyescas was first performed in Barcelona in 1911 and then in Paris in 1914 where it soon became extremely popular.

Goyescas and the fateful voyage

He was persuaded to make Goyescas into an opera. The opera was going to be performed at the Paris Opéra but, because of World War I it was performed in New York instead. Granados was invited to go to New York to watch the first performance of his opera. He was very frightened of the sea, but eventually was persuaded to go. The opera was a great success when it was performed on 26 January 1916. Granados felt that he was at the beginning of a successful career. President Wilson invited him to play the piano at the White House. Because of this invitation he missed the ship that would have taken him back to Spain. He took a ship to England instead. In Liverpool, he got off the ship and got onto another one which would take him to Dieppe in France. The ship was called the Sussex. When the Sussex was in the middle of the English Channel it was torpedoed by a German submarine. Granados managed to get onto a lifeboat, but then he saw his wife in the sea and he jumped in to try to save her, but they both drowned.

Granados wrote mainly piano works and songs. He was influenced by Romantic composers such as Grieg, Schumann and Liszt, but he was starting to make his music sound very Spanish. His songs include some of the best written by a Spanish composer. His piano works include Ten Spanish Dances, which are not too difficult to play, and the suite Goyescas which is mostly quite difficult to play. The most popular piece in this suite is called Lament, or The Maiden and the Nightingale. It has a very romantic tune which is repeated several times.

All content from Kiddle encyclopedia articles (including the article images and facts) can be freely used under Attribution-ShareAlike license, unless stated otherwise. Cite this article:
Enrique Granados Facts for Kids. Kiddle Encyclopedia.