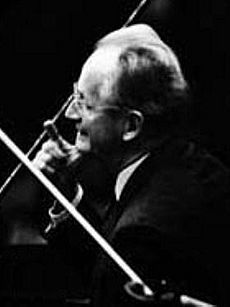 Wilhelm Walter Friedrich Kempff (25 November 1895 – 23 May 1991) was a German pianist and composer. Although his repertory included Bach, Liszt, Chopin, Schumann, and Brahms, Kempff was often well known for his interpretations of the music of Ludwig van Beethoven and Franz Schubert, both of whose complete sonatas he also recorded.

All content from Kiddle encyclopedia articles (including the article images and facts) can be freely used under Attribution-ShareAlike license, unless stated otherwise. Cite this article:
Wilhelm Kempff Facts for Kids. Kiddle Encyclopedia.