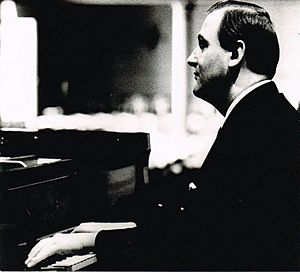 Jörg Demus (2 December 1928 – 16 April 2019) was an Austrian pianist and composer. He had his first piano lesson at the age of six. From the age of 11, he studied piano and conducting at the Vienna Academy of Music. He graduated at the age of 17. He won the Ferruccio Busoni International Piano Competition in 1956. He worked with singers such as Elisabeth Schwarzkopf, Dietrich Fischer-Dieskau, Elly Ameling and Peter Schreier. He also worked with string players like Josef Suk and Antonio Janigro. He has been called one of the most successful Austrian pianists.

All content from Kiddle encyclopedia articles (including the article images and facts) can be freely used under Attribution-ShareAlike license, unless stated otherwise. Cite this article:
Jörg Demus Facts for Kids. Kiddle Encyclopedia.