Potsdam is the capital and largest city of the German federal state of Brandenburg. It directly borders the German capital, Berlin, and is part of the Berlin/Brandenburg Metropolitan Region. It is situated on the River Havel some 25 kilometres (16 miles) southwest of Berlin's city centre.

Potsdam was a residence of the Prussian kings and the German Kaiser until 1918. Its planning embodied ideas of the Age of Enlightenment: through a careful balance of architecture and landscape, Potsdam was intended as "a picturesque, pastoral dream" which would remind its residents of their relationship with nature and reason.

The city lies in area of interconnected lakes and is distinguished by a series of cultural landmarks, in particular the parks and palaces of Sanssouci, the largest World Heritage Site in Germany. The Potsdam Conference in 1945 was held at Cecilienhof Palace.

Babelsberg, in the south-eastern part of Potsdam, was already by the 1930s the home of a major film production studio and it has enjoyed success as an important center of European film production since the fall of the Berlin Wall. The Filmstudio Babelsberg is the oldest large-scale film studio in the world.

Potsdam developed into a centre of science in Germany in the 19th century. Today, there are three public colleges, the University of Potsdam, and more than 30 research institutes in the city. 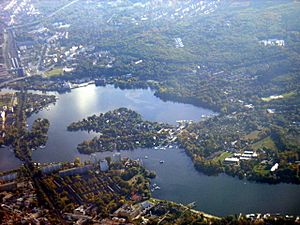 The Templiner See south of Potsdam

The area was formed from a series of large moraines left after the last glacial period. Today, only one quarter of the city is built up, the rest remaining as green space.

There are about 20 lakes and rivers in and around Potsdam, such as the Havel, the Griebnitzsee, Templiner See, Tiefer See, Jungfernsee, Teltowkanal, Heiliger See, and Sacrower See. The highest point is the 114-metre (374 ft) high Kleiner Ravensberg.

All content from Kiddle encyclopedia articles (including the article images and facts) can be freely used under Attribution-ShareAlike license, unless stated otherwise. Cite this article:
Potsdam Facts for Kids. Kiddle Encyclopedia.