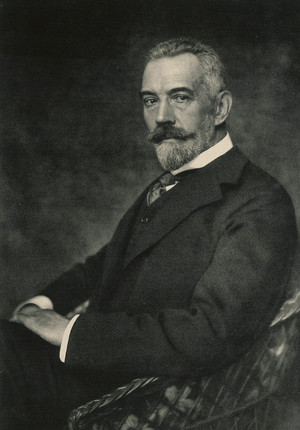 Theobald Theodor Friedrich Alfred von Bethmann Hollweg (November 29, 1856 in Hohenfinow (nowadays in Brandenburg) - January 1, 1921 in the same place) was a German independent politician. He was Reich Chancellor (Reichskanzler) of the German Empire during the greatest part of World War I.

Von Bethmann Holweg studied law at the University of Strasbourg, Leipzig University and the Humboldt-University of Berlin. He started working in the civil service of Prussia in 1882. He became president of the Province of Brandenburg in 1899. He was twice Minister of the Interior: of Prussia from 1905 to 1907, and of the German Empire from 1907 to 1909. He was also Vice Chancellor of Germany from 1907 to 1909.

He became Reich Chancellor in July 1909, succeeding Bernhard von Bülow. Before the war he tried in vain to improve relations with the United Kingdom. During the war he unsuccessfully opposed the launching of the U-boat warfare without any restrictions in March 1917. Because of peace efforts of the Reichstag he resigned in July 1917, and was succeeded by Georg Michaelis.

After the war he wrote his memoirs. Von Bethmann Hollweg died of pneumonia at the age of 64.

All content from Kiddle encyclopedia articles (including the article images and facts) can be freely used under Attribution-ShareAlike license, unless stated otherwise. Cite this article:
Theobald von Bethmann Hollweg Facts for Kids. Kiddle Encyclopedia.