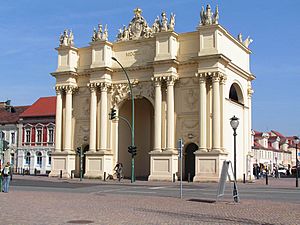 Brandenburg Gate from the field side 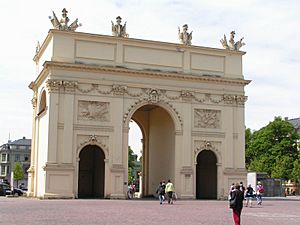 Brandenburg Gate from the city side

The Brandenburg Gate (German: Brandenburger Tor) on the Luisenplatz in Potsdam, should not be confused with the gate of the same name on Berlin's Pariser Platz, it was built in 1770/71 by Carl von Gontard and Georg Christian Unger by order of Frederick II of Prussia. It stands at the western end of Brandenburger Straße, which runs in a straight line up to the Church of St. Peter and St. Paul.

Previously, from 1733, there was another, simpler gate on the same spot, which resembled a castle gateway. Together with the city wall, a form of toll barrier, and the other gates it was intended to prevent desertion and smuggling.

Towards the end of the Seven Years' War, Frederick the Great had the old gate demolished and built, in its stead, this new Brandenburg Gate, as a symbol of his victory.

Since the city wall was demolished around 1900 the Brandenburg Gate has been a free-standing structure.

All content from Kiddle encyclopedia articles (including the article images and facts) can be freely used under Attribution-ShareAlike license, unless stated otherwise. Cite this article:
Brandenburg Gate (Potsdam) Facts for Kids. Kiddle Encyclopedia.